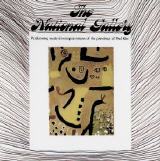 This superbly melodic and strange distillation of pop, folk, psych and jazz was inspired by the paintings of Paul Klee, and first appeared in 1968. Despite being credited to a proper band, it was in fact a studio recording overseen by the Cleveland-based team of jazz composer Chuck Mangione and local producer/arranger Roger Karshner, who called the songs "electronic paintings." This is a suite of beatnik-styled, open-riffed rock-art with stunning, psychedelic vocals. The album is presented here for the first time on CD, complete with liner notes and two rare bonus tracks from a pre-LP 45 credited to Bhagavad-Gita - Freak Emporium

Without a doubt, this release is one of the most strange things that I've heard in some time. Originally released back in 1968, Performing Musical Interpretations of the Paintings Of Paul Klee is a completely bizarre amalgamation of pop, folk, and psych rock music that both sounds like several different releases from the same era and also completely unlike them as well. The National Gallery was actually a studio creation, a group of musicians assembled by jazz composer Chuck Mangione and producer / arranger Roger Karshner (who called the songs "electronic paintings"). While there's nothing truly electronic about the work by today's definition, one can hear some basic musical similarities to The Zombies' classic Odyssey and Oracle, which was released the same year, along with a slew of other touchpoints.
One of the things that makes it really stick out is the completely bizarre vocals. Of course, it wouldn't be a late 60s album without some lyrics and vocals that are completely over the top and at times nonsensical, but listening to The National Gallery I've found myself not only groaning a couple times, but laughing aloud as well. The album opens with "Barbaric, Classical, Solemn," and the group basically explores the definitions of the three title words, both lyrically and melodically. Overlapping vocal layers express each delicately while an almost instrumental hip-hop beat, string flourishes, some rough guitars and even an organ blare highlight the track.
It could very well be my modern perspective creeping in again, but it seems that "Diana In The Autumn Wind" finds the group tackling Seasonal Affective Disorder, and the track is a gem, with understated verses and more boisterous choruses with horns and more vocal choirs. In terms of overall success, "Boy With Toys" may very well be the standout on the album. Grooving with a seriously funky rhythm and some scorching guitars sections, the song takes on the Oedipal complex with what are some of the most hilarious lyrics I've heard in some time.
In other places, the more playful lyrics are simply a bit too silly, but even at these points the music more than makes up for things. "A Child's Game" finds the group twisting perspectives, imagining adults envisioning themselves as a child would. Meanwhile, back and forth male and female vocals, orchestral arrangements, and light guitars propel the song forward. "Fear Behind The Curtain" is another strange track, with almost tribal sounding polyrhytms and more aggressive vocals. Lyrically, the group is about as out-there as ever, spitting out stream-of-consciousness lines before tying everything together at the end with chanted lines that enlighten the oddities before it. Apparently the album sold very poorly upon release, while both Mangione and Karshner went onto much bigger and well-known projects soon afterward. Although it's not as strong as some of its contemporaries, it's definitely an overlooked release that has a slew of great stuff on it. - - almost cool music reviews-

Literally an 'art-rock' concept album from Cleveland, inspired by the works of artist Paul Klee (1879-1940) and complete with a glossy leaflet with lyrics and pictures of some of his paintings.
A fusion of harmonious folk, pop and avant garde with some psychy touches, culminating in its most memorable track Long Hair Soulful with stoned vocals and acid-etched guitar. This had been released on 45 in 1967 in an abridged form and credited to Bhagavad Gita, backed by an instrumental version of the same (Philips 40485, with PS). The instrumental take can be heard on Beyond The Calico Wall CD (not on the LP version).
The musicians themselves don't get a name-check, just a picture - three guys and a gal.
Composers Roger Karshner and Charles Mangione were involved with several other Cleveland area acts and Karshner was manager of one of the city's more successful sixties bands, The Outsiders.
It's worth noting that several tracks on this album were also recorded, in jazzier versions, by the Gap Mangione Trio on the album Diana In The Autumn Wind(GRC 9001) 1968, with Charles Mangione, Steve Gadd and Tony Levin. Mangione kept on recording throughout the seventies, with at least three albums on A&M between 1976 and 1979. - Max Waller

This extremely interesting exploration of pop, folk, psych and jazz was inspired by the paintings of Paul Klee, a Swiss German painter who worked in the expressionist, cubist and surrealist styles. Though that might make the record sound like an esoteric bore, it is far from that. Recorded in 1968 as a studio project overseen by jazz composer Chuck Mangione and producer Roger Karshner, the record features both male and female psychedelic vocals and plenty of garage-influenced art rock. Perhaps best described as avant-garde psych pop, it is at times offbeat, witty and dry. “Self Portrait” is both reminiscent of the Bonzo Dog Band and an instructional manual for ’90s twee indie rock vocals. Other times, like on “Diana in the Autumn Wind,” the National Gallery deliver an art pop hit that’s both strange and catchy. Conceived as “electronic paintings,” this project was mainly overseen by the two producers, whose beautiful and unusual record was condemned to obscurity as a result of poor sales. This reissue features interesting liner notes and two bonus tracks culled from a non-LP 45 credited to Bhagavad-Gita - “song of the most holy,” from the Vedic Bible. Truly strange, totally groovy. - Sara Saljoughi, Exclaim!

This mysterious album emanated from Cleveland, where producer Roger Karshner (who'd been involved with local hit-makers the Outsiders) and jazz musician Charles 'Chuck' Mangione decided to collaborate on a selection of so-called 'electronic paintings' based on the work of German-Swiss abstract painter Paul Klee (1879-1940). The first fruits of their labours emerged in 1967 - a single credited to Bhagavad-Gita (the Vedic Bible, translating as 'song of the most holy'), featuring two takes on Long Hair Soulful, one vocal and one instrumental. Though it was no hit (making the original picture sleeve issues - Philips 40485 - highly sought-after today), they proceeded with an album the following year. The Bhagavad-Gita promotional material made the lofty claim that Karshner had 'reached a completely new plateau in the realm of pop contemporary music by putting the works of Klee tomusic,' and the album is indeed highly unusual. Though credited to a band (who are pictured on the back cover), it is thought to have been a studio project overseen by the two men, and was issued with a glossy leaflet including lyrics and reproductions of various Klee pictures. It must have been an expensive enterprise, and was not a successful one.
Shortly afterwards, four of its tracks also appeared Diana In The Autumn Wind (GRC 9001), an instrumental jazz-pop LP recorded by Mangione's brother Gap in August 1968, but conducted by him - Diana In The Autumn Wind, Boy With Toys, Pond With Swans and Long Hair Soulful. This fared even less well commercially, condemning the project to underserved obscurity, and putting a premature end to a nascent pop sub-genre. - Release Notes