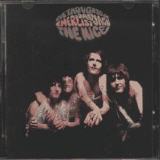 Thirty-five yers after its first appearance, The Nice's debut album, The Thoughts Of Emerlist Davjack, represents different things to different people. For the historians, it's one of the releases that gave birth to Progressive Rock, its pioneering fusion of jazz, blues, pop, rock and classical elements being quickly adapted by the likes of Yes and King Crimson. Similarly, genre buffs consider it to be one of the strongest albums to emanate from the British psychedelic era, while Keith Emerson fans simply view the release as the starting point for a hugely influential and successful career. Whatever camp you fall in, Sanctuary's heavily extended retooling of The Thoughts Of Emerlist Davjack - complete with alternate versions, stand-alone A and В sides, single mixes, BBC sessions, even a John Peel-hosted promotional 7" sampler for the album - surely stands as the definitive version of о cornerstone album... - David Wells, CD liner notes

Predeccessor to ELP and Refugee. Much more classical and symphonic than ELP in some respects, though some may view it as more pompous and pretentious. Foundations of Emersons style and ELPs future were laid here and in particular on the song "America."... - New Gibraltar Encyclopedia Of Progressive Rock

The NICE was the precursor to one of progs most influential bands - EMERSON, LAKE & PALMER. This band began their career at the dawning of rock and its sub genres, the closing of the sixties and an era of growing desires to challenge the boundaries of popular music. The four musicians branched out, utilizing and combining classical, jazz, blues and rock music to forge a new and dynamic sound - later to be known as Progressive Rock. The seeds were already sown for the Symphonic and Orchestral style of music that Keith EMERSON would champion throughout the decades to come - THE NICE discography, MP3 and reviews

The Nice only existed for three years, and in that time they went through many a false start as well as some membership and directional changes — but in the process, they helped bridge the gap between the pop-psychedelia of 1967 and the more ambitious (and, ultimately, pretentious) brand of music known variously as art rock or progressive rock. They never sold many records in their own time, until near the end of their history as a band, but they were among the 1960s groups that had some of the greatest

influence on the music of the early '70s...
...They played a strange mix of psychedelic blues, heavily laced with cadenza-like solos on the piano or organ, and dressed up in ornate, flashy guitar, reminiscent of Jimi Hendrix — amid the pop flourishes and heavy piano and guitar riffs, one could hear influences of classical, soul, and jazz. Their debut album was ready for release early in 1968 but was delayed getting into stores until much later in the year, at which point they had released a single to support it — their chosen track was a driving, flashy, instantly memorable instrumental rendition of the song "America" from West Side Story that got them lots of airplay and bade fair to get them on the U.K. charts, until objections to a very tasteless picture-sleeve design, coupled with the complaint of co-author Leonard Bernstein that he'd never given the group permission to revamp his piece — which led to their inability to get the single issued in America — took the wind out of their sails. Their year's worth of work had begun to build the group, and especially the extrovert personality of Emerson, a following in England. The organist player would jam knives into his keyboards, set fire to various objects on-stage (including, at least once, at Royal Albert Hall, the American flag, creating a potential diplomatic incident for the government), and simulate sex with his instrument — by 1968, he was known as the Jimi Hendrix of the keyboard. But amid the controversy over the single, the quartet's debut album, The Thoughts of Emerlist Davjack — which actually sounded very different from the single, and already very dated, died a withering death on record shop shelves during the summer of 1968. In truth, the debut LP was probably held up too long and released too late anyway, its cheery psychedelia being a little old-fashioned by the summer of 1968. There was a distinctly unusual undercurrent to the music, however, beneath the trippy pop tunes and spaced-out lyrics, that could have saved the record. The Thoughts of Emerlist Davjack sounded different from virtually anything else in music at the time — spook-house organ solos and slashing guitar attacks that ran together and clashed, and heavily veiled quotations from Dave Brubeck, among other sources; "Rondo" was nothing less than a large-scale psychedelic rock adaptation of "Blue Rondo a la Turk.".. - Biography by Bruce Eder, AMG