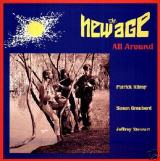 "This is what can be called one of the major sensations in the raga influenced "Psychedelic/Acid Folk" field. Also some of the earliest recordings in this genre and hitherto unreleased After the release of the "Light of Day" album in 1966 the now legendary Pat Kilroy, Susan Graubard and Jeffrey Stewart went on with playing and creating music together. What you hear on this album is what they recorded for Warner Brothers in the summer of 1967, a true groundbreaking adventure of the highest order. They expanded in the direction they started in 1966 and the result is far beyond and superior to everything I heard from that time period before in this musical style except for Tim Buckley. No wonder that it didn't come out at that time because those recordings were for sure far too adventureous for Warner Brothers and also for almost other leading music companies at the time. Incredible - and I mean INCREDIBLE raga influenced Psychedelic/Acid Folk with some of the best songwriting I know of with monstrous lyrics and deep lead vocals. Also a wide range of instruments were played like incredible raga-esque acoustic guitar, electric bass, Spanish cowbells, bell tree, silver flute, bamboo flutes, viola, tamboura, conga drums, tables, acoustic and electric bass and tambourine. Pat Kilroy sadly died of Hodgkins disease in December of 1967 at a very young age. If this record had a proper release at the time, it would be a major classic and a milestone today in the psychedelic history book. Be ready for an incredible musical trip along with an amazing, long and very intense story behind."