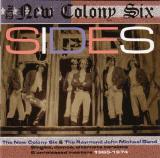 "I wasn't expecting too much from this New Colony Six comp, but as I am a basic fan ever since I bought the original "Colonization" Lp in a thrift store, I simply bought this new cd in a completist reflex.
This is rather a good surprise : the Raymond John Michael Band's 11 tracks are pretty good early-70s rock, with some country-rock tendencies well assumed - except for a carbon copy cover of the Bee Gees' "Let there be love". Nothing essential, but always good to have & an interesting piece of history.
The 2 recent songs are great : a 2005 acoustic version of "Can't you see me cry", fragile & touching, sung by Ray Graffia Jr, that never sounded as juvenile, and then a "new" song, "Sides", in fact an old RJM Band unreleased song, re-recorded in 2007 by Ray & his brother Ron. Just brilliant, with lots of heavy, scorching psychedelic guitars.
Now, the most important part of the Cd is the New Colony Six unreleased tracks : notably alternate versions of "Rap-A-Tap", "Accept my ring", a live recording of an unknown - until now - song, "The time is right", & a 1970 demo of another never-heard before track, "Muddy feet on the Mississipi". All those NC6 are incredibly good, at least to my fan's ears, and fully justify this cd's existence. The highlight being this fantastic fuzzy version of "Rap-A-Tap", in fact a demo but the best existing version of this song.
So, this cd is a mixed bag, OK, but essential for completists. Not the best introduction, though. Beginners should rather turn towards the Sundazed reissues of "Breakthrough" & "Colonization", their 1966 & 1967 LPs."