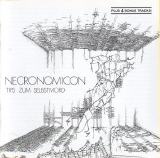 "It's always difficult reviewing Krautrock, simply because Krautrock, as a genre, tends not to patch directly into the generally accepted definition of Prog Rock - it's much closer to psychedelia. It also tends to be inconsistent - when it's good, it can be stunning, but when bad, falls into directionless, amateurish noodling that can be plain embarrassing.

When approaching this album, I had to rid myself of all the hype surrounding it - much of which, one might suspect, comes from people who own a copy and want to make a fortune selling it on, and take it for what it is.

What it is, is a concept album by a group of guys who had been together for little over a year, performed a few gigs and, thanks to the economic backing of a friend, managed to get into a small studio armed with basic recording equipment (a 2-track Reel-to-Reel) and release what would turn out to be one of the most expensive Prog Rock albums ever.

So it's with calm ears and a fresh pair of Sennheisers that I dive into this highly prized work which, for those who don't like long reviews, really is very, very good indeed - but probably not worth the £1,000+ price tag of an original. It's definitely worth the £15 or so of a repress or CD if (and it's a big IF) you are already a fan of Krautrock.

In summary, so you can skip the tech stuff, it's a Masterpiece for what it is. I hardly ever make this distinction, as I prefer to guage against the "Classic" Prog bands - the justification is in the review below, and no apologies for the length ;0). Note that it's only just made the grade, but it doesn't deserve lower than a 4.8, IMO.

A highly reverbed and slightly manic voice improvises as if testing the microphone, then vocalises the first riff in "Prolog", which is picked up with a bang by the band, and, surprisingly, dropped in a heartbeat, the guitarist appearing to start it, but then tailing off, as if in shame - or possibly disgust. It could be either, given the subject matter of the lyrics. A deeply reverbed and wah-drenched, partially Hendrix-inspired solo follows, angular and jerky, pained and edgy.

A hard series of chords punches through, and a new, tight, heavy riff follows - great headbanging stuff, but you do have to be able to cope with the rough production and knowledge that the band played this entirely live in the studio.

A keyboard joins in, and we get flavours of Iron Butterfly before the vocals come in - and these are of a great quality, with good tones on the high notes and reasonable harmony. There's nothing new or particularly interesting about the ensuing guitar solo - what is of more interest are the unfolding and very powerful riffs - there's a whole wonderland of stealable material in here for bands running out of ideas and needing a little-known source...

The dark tension and clear layers make for a very emotionally draining landscape, and the sudden ending makes you feel like you've fallen off a cliff.

"Requiem Der Natur" begins with huge, hollow and sinister keyboards, coloured with sparkly sounds, before a mellow acoustic guitar brings us to an earthy and folky flavoured section of beautiful drifting sound with flavours of Pink Floyd circa 1968- 1970, but also Necronomicon's very own, very dark style.

Around 3:30, there is some deep, chanting vocal "Ahhs", joined by mid and top- range voices in a quasi "Monks meet operatics" kind of style, building and building until the recording equipment can't cope. Just as you think the equipment will expire, around 4:45, the music drops into a sort of jazz-fusion style, with the band right at the edges of their abilities, but pushing very hard in order to express the music - you'd hardly believe the band had only been together for a year, as it operates as a very cohesive unit, each member giving each other the necessary space to grow and improvise - successfully and sometimes unsuccessfully - but that's always the case with live improv.

A "Big Bottom" style bass solo follows - although, to be fair, the bassist tries really hard to make the improv interesting and exciting - and succeeds to a fair degree, especially when he gives the cue for the keyboard and guitar re-entry - it really isn't apparent, and you have to listen hard several times to get it, it feels so natural.

The Choir section returns - and it feels perfectly natural that it should do so - framing the jazz section very nicely - giving a masterclass in how form can be made to feel spontaneous.

The title track begins with one of the most original intros I've ever heard - incredibly simple (but the best ideas often are), then kicking into an uptempo rocker with falsetto from hell that makes Matt Bellamy sound like a Contra bass... There are lots of goodies in here, including tempo changes, guitar solos, enthusiastic guitar panning, and a dark groove that would provoke many nuns into dancing around mooonlit fires sans habits... in my twisted imagination, at least. There are one or two "baddies" in here too - but easily overlooked.

"Die Stadt", apart from having tuning issues in the acoustic guitar, smacks a little of early Kraftwerk, but darker, naturally, and the intro appears to be a proclamation - Hawkwind style. When the big riff kicks in, it reminds me very much of Mountain in texture, but, true to form, Necronomicon break it all down, with a "cat on a hot tin roof" approach that demonstrates exactly how to go off at tangents and really mean it. One or two timing issues (!) do not spoil the infectious grooves that they settle into, with the now familiar dark keyboard washes and walking bass lines - I get a flavour of Hawkwind's "Master of the Universe" in places. I'm assuming that the spare acoustic was used for the outro ;0)

"In Memoriam" is so dischordant, it too appears to have tuning issues, but these are soon resolved, and it's apparent that the heavy dischords are totally intentional. Very rough at the edges to start with, this piece dives around, and a mixed bag of good and truly superb ideas are thrown out, with decorative fill/synchronised runs that pre-empt Prog metal. Once the band have got into their groove, this really is a piece that every fan of Krautrock should hear - deeply and highly emotional, yet carefully worked out, with plenty of space for improv. Almost perfect, despite occasional timing issues. The ending is particularly notable, although I have to admit the falsetto annoys me too.

Requiem Vom Ende rounds things off consistenly nicely, despite more tuning issues, which we just have to swallow and live with - after all, it's the music that's important. And what we get from the music is more cavernous sounds, thoughtfully meandering bass, then big, crashing chords of chaos, and over-reverbed voices clearly proclaiming rather than singing, carrying an authoritative tone, but dropping back to a wistful, almost mournful air, carrying a strong flavour of Floyd.

Now, around 3:00, is the most powerful moment on the album, a throbbing, pulsating orb of music that grows (and might arguably have benefitted from losing the falsetto voice), grows, drops, and recapitulates. It's at this late point in the song I realise that the main riff is a combination of "Pictures of Matchstick Men" and "Hey Joe". An inspired welding together, that results in a spacious riff with a familiar feeling groove.

I won't cover the very end - I'll leave that entirely for your discovery ;o)

Here's a clue - it's not at all disappointing!

All in all, a most excellent addition to any Prog Rock collection - which doesn't mean you're going to like it. My advice is to get familiar with Krautrock before approaching this album, as those unfamiliar with the genre are likely to be highly disturbed by it.

It just scrapes into the Masterpiece category, because I'm concentrating on the music alone, and ignoring technical and execution issues simply because of the low budget live recording.

A real mind-blower - but be careful, as in the wrong hands it could be mistaken as simply a blower..." (Mark, progarchives)