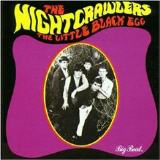 The Nightcrawlers had a small hit, "The Little Black Egg," in the mid-'60s that's remembered for its cutesy folk-rock-cum-garage sound and its enigmatic lyrics. Although it only reached number 85, it made more of an impact than that low placing might reflect, since it was a regional hit in various parts of the country after it was recorded in 1965, only making the national charts upon its third issue in early 1967. The Nightcrawlers did a few more singles with their original lineup, which disbanded in mid-1966 with enough material for one LP on Kapp. A different Nightcrawlers did keep going for one more single in 1967 and principal songwriter Charlie Conlon did a couple of singles as leader of a different band called Conlon and the Nightcrawlers. For the most part, the Nightcrawlers favored a sparse folk-rock sound that comes off as a poor person's Beau Brummels.

The Nightcrawlers were formed in Daytona Beach, FL, in the mid-'60s and along with the Birdwatchers and We the People, were one of the most regionally popular Florida rock groups of that era. Conlon's original material showed a Byrds/Beau Brummels influence in the folky guitar riffs, minor melodies, and introspective lyrics, but weren't nearly as skilled or developed as those groups were. Conlon actually left the band in spring 1966 and the Nightcrawlers broke up a few months later, although two of the members formed a different lineup of the Nightcrawlers that did one more single for Kapp, "My Butterfly." That 45 was Who-lite, not very similar to the old garage-folk-rock Nightcrawlers and in spite of that, was their best song other than "The Little Black Egg." They never recorded after 1967, but different lineups with the Nightcrawlers name continued to perform until 1970.

At a glance it might be assumed that this is the definitive Nightcrawlers retrospective; after all, it has 24 tracks, by a band that only did a few singles and an album. It does contain everything from their sole LP (also called The Little Black Egg, from 1967) and a few non-LP singles and unreleased cuts. However, there are curious imperfections that prevent this from being a definitive retrospective. The B-side of their first 45, "Marie," isn't here, and more problematically, their 1967 single "My Butterfly"/"Today I'm Happy" is not included, either. Nor does it include the two singles by spin-off band Conlon & the Crawlers. Yes, the back sleeve does note that this has "all the recordings by the original band," which presumably means there was a deliberate decision to exclude all material that did not feature that lineup. The problem is, "My Butterfly" — an incredibly accurate early Who imitation complete with high harmonies, ringing guitar, and airplane take-off instrumental breaks — is their best song other than "The Little Black Egg." Both sides of the "My Butterfly" single, and both sides of both Conlon & the Crawlers singles, were included on the Eva LP compilation The Little Black Egg, which had much poorer sound and barely any liner notes (the Big Beat compilation, on the other hand, has a copious group history). The optimum approach would have been to add the 1967 Kapp single and the Conlon & the Crawlers singles in place of the handful of previously unreleased British Invasion/R&B covers that conclude the Big Beat CD. As it is, neither the Eva nor the Big Beat anthologies represent the group's output to collectors' utmost satisfaction, although comments in the liner notes to the Big Beat compilation propose that the missing material is not worthy of comparison to what's heard on this disc. As for what is here, it's mostly pretty thin and forgettable, though periodically engaging, moody garage-folk-rock.