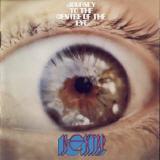 Nektar’s debut album is finally heard in the manner it was intended. After the location of the original studio multi-track masters, “Journey”, Nektar’s Space-Rock masterpiece has been remixed in 5.1 Surround sound with astounding results.
Recorded in 1971, the album is now rightly regarded as a classic of its genre. This SACD release sees both the new Surround Sound remix and the remastered version of the original master tapes presented for the first time. Being a hybrid SACD, this release will also play the normal stereo version on any CD player.
As an extra bonus, the track “Do You Believe in Magic” is added along with “1-2-3-4” (which makes its debut on CD) as bonus features. - Re-issue Description

Prelude An introduction Astronaut's
Nightmare A rocket leaves on course for Saturn, at a time when Earth is on the verge of a nuclear World war. Countenance The rocket is intercepted by a Saucer of unknown origin. The astronaut joins if and learns that the Saucer had been observing earth for many years and was surprised at our warlike ways. The strangers offer to show the Astronaut life in their Galaxy. The Astronaut agrees and they leave together. The Nine Lifeless Daughter's of the Sun The interstellar ship thrusts away from the sun and our solar system into the void and de-materialises into "Hyperspace". Warp Oversight Once in a state of no time - no space, the ship is
subject to a strange journey and then suddenly re-materialises in another Galaxy. The Dream Nebula The new Galaxy is so serene and beautiful. The atmosphere creates incredible dreams in his mind, and gives him great knowledge. It's All in the Mind The new insight expands more than he can bear and he breaks mentally wanting to see no more.
Burn Out My Eyes His wish is granted, he sees only with his mind, he struggles with his senses trying to regain control of himself. Void of Vision Now travelling at great speed down a long beautiful valley, he realises that there is more to life than he thought. Suddenly he sees a great EYE suspended in space - "THE ALL SEEING EYE"! Pupil of the Eye He enters the Eye to try and comprehend the Universe inside himself. Suddenly he becomes the eye and sees at once everything there is to see. It is so wonderful and at the same time so horrible, he is afraid. He realises that eveiylhing he has seen, exists on Earth although he had not noticed before because of all the wars. Look Inside Yourself His mind cries out to anyone willing to listen that they should look for there-selves and try to understand that Eailh is heading for total destruction. Death of the Mind As if in warning his mind drifts back to his departure and he visualises the destruction of Earth!


British band that lived and recorded in Germany, and included two (British) members on lights and visuals (Apparently Nektar live was quite an impressive spectacle, hence their surprising popularity). Journey To The Centre Of The Eye is a mindblowing epic with lots of echoplex guitar and dual Mellotrons which is quite in tune with the Krautrock stuff going on around them, yet is definitely British. The reverb guitar cascades often remind me of Ash Ra Temple or early Tangerine Dream, whereas the lush Mellotrons and often intense tones make me think more of King Crimson. An impressive debut... - Mike Ohman, New Gibraltar Encyclopedia Of Progressive Rock

Folks unfamiliar with the band Nektar think they are from Germany. What actually transpired was the quartet of Englishmen met in Germany in 1969 and formed the band. Ron Howden (drums, percussion), Derek "Mo" Moore (bass, vocals), Alan "Taff" Freeman (keyboards, vocals) and Roye Albrighton (guitar, lead vocals) would become huge in Germany and nearly broke big the in the U.S.
Eclectic Discs/Dream Nebula Recordings have reissued the four critically acclaimed albums that defined the band's career. A Tab In The Ocean, Journey To The Center Of The Eye, Remember The Future and Recycled are lovingly remastered with detailed liner notes for former fans and the newly indoctrinated to enjoy. Their well-known masterpiece Remember The Future was appropriately chosen for the SACD format as well as Journey To The Center Of The Eye.
Their sound was a progressive-psychedelic mixture of rock that was far ahead of its time. For this listener this was a new wonderful listening experience. Prior to receiving these CDs, I had not heard any Nektar music besides a video of "Remember The Future" on a DVD compilation. I can understand now what all the talk has been about the band reforming and going on tour.
Roye Albrighton was the driving force of this band. His skilled guitar playing set the table for his fellow band mates. Each recording was outstanding and stands as a testament to their importance to the history of prog-rock music. What made this so interesting was how the label broke up each album into two parts respectively, the original recordings versus the newly remastered versions. You are now able to hear succinct differences between the two formats for the first time. Both versions are excellent and it was a treat to get the best of both worlds.
Any prog-rock listener will most certainly enjoy taking in this musical paradise in more than once, I listened to each CD four times myself and I know there will be many more spins of each CD down the road. I look forward to catching Nektar 2004 on the road this year to relive all of these great songs in a live setting. I never would have decided to see them in concert if it wasn't for this remastered series.
• Rating: 5/5 overall - PROGRESSIVEWORLD.NET: REVIEWS BY KEITH "MUZIKMAN" HANNALECK

With the creation of the Dream Nebula Recordings imprint, Nektar and their management have had the opportunity to source the first generation master tapes of "Journey" and the "Do You Believe in Magic" single. The previous CD appearance of the album on the Bellaphon label was made from a poor quality copy master and bizarrely featured additional reverb which was applied during the original pre-mastering process.
Whilst sourcing the original master tapes for this series of Nektar reissues, the original multi-track tapes were found of "Journey to the Centre of the Eye". With the band always at the forefront of technology during the 1970's, the decision was taken to remix the album in 5.1 surround sound. Also possible was the editing of "The Dream Nebula" into a continuous piece. A glance at the multi-track masters reveals that the song was recorded in two distinct parts and at two different sessions, with the distinct intention of having each part as a separate track. Whilst debating the merits of remixing "Journey" in 5.1 Surround sound it was decided to edit both versions to form a continuous track. Although complex, the finished results can be heard on the 5.1 Surround mix. The disc you hold in your hands is an 'SACD Hybrid disc', which contains a Stereo layer, playable on any CD player. It features the remastered and denoised original mix and also contains the 2004 surround mix which can be heard on any SACD player or DVD player with SACD compatibility. We are pleased and proud to present Nektar's debut album in the manner it should be heard. - CD Notes