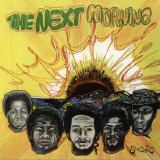 A wickedly rare phase 'n' fuzz fueled slice of psychedelia circa 1970! - featuring ripsnorting guitar-work by Bert Bailey- these guys were Caribbean immigrants (four from Trindad, one from the Virgin Islands) and they idolized the Who and Jimi Hendrix.

African-American psychedelic groups, and rock bands from Trinidad, were both uncommon items around 1970. The Next Morning fit into both categories, making them an interesting curiosity regardless of their music. The music, however--average 1970 hard-rock with soul, hard rock, and psychedelic influences, particularly from Jimi Hendrix--is not as unusual as their origins. One would not suspect from listening that the group were largely from Trinidad, with the proliferation of heavy, bluesy guitar and organ riffs, and the strained soul-rock vocals of Lou Phillips. They recorded one album, released in 1971, that received little notice before their breakup.

The Next Morning formed in the late 1960s in New York, four of the five members having come to the city from Trinidad; Lou Phillips was from the Virgin Islands. Jimi Hendrix was a big influence on the band, as were some other hard rock acts of the period like the Who, and rock-soul hybrids like Sly Stone and the Chamber Brothers. The Next Morning were busy on the New York club circuit and attracted attention from Columbia Records, but ended up signing to the smaller Roulette label, whose Calla subsidiary issued their lone, self-titled LP in 1971. Although the jagged guitar sounds of Bert Bailey and some unexpected chord shifts made the album less pedestrian than some efforts in the style, the songs tended toward the long and meandering side, and the material was not as outstanding as their influences. The Next Morning's career sputtered out in the early 1970s, with bassist Scipio Sargeant finding some work doing horn arrangements for Joe Tex and Harry Belafonte. The Next Morning album was reissued on CD by Sundazed in 1999.