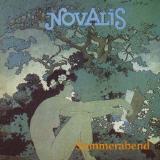 Review:
"Sommerabend" is nothing short of great symphonic prog with 3 nice long epic tracks. NOVALIS blend hypnotic song elements with clean crisp progressive passages. Lyrics are in German and are quite good fitting in well to the mood and atmospheres here. NOVALIS have a very traditional German underground feel to their work especially with the keyboard and guitar sounds. "Sommerabend" is very well recorded and offers superb stereo separation. Sound effects are used sparingly, but those present add quite a bit of depth to the music and work well. Once again this is a very complete recording and offers a nice wide range of musical variation to please most prog fans. Recommended!

Novalis incarnated one of the finest expressions of German symph prog, with their third album 'Sommerabned' being regarded by many as one of their top achievements. Tehir prog style is heavily influenced by Nektar, 73-75 era Pink Floyd - just similarly to their more veteran compatriots of Eloy -, and to a certain degree, 70-71 era Genesis and early BJH. The compostions are not too complicated, but despite their relative simplicity, the melody lines and harmonic textures are quite attractive and effective: Rahn's role on keyboards proves to be crucial at his point, creating the perfect ambience for Job's guitar solos and some of his own, while the rhythm section allows the themes breathe at ease, in an evocative manner. The opening instrumental is a powerful entry, IMHO, the best number in the album, since its energy is managed with gentle skill. 'Wunderschätze', whose lyrics are teaken from a Novalis' poem, starts in a lyrical mood with a prominent role for acoustic guitar arpeggios: later, in the interlude and the closing section, things get a bit harder in order to prepare the way to the bombastic climax. Finally, the namesake 18-minute suite comprises the "best of both worlds", that is, the energy of track 1 and the lyrical introspectiveness of track 2. IMHO, this is the less successful number in the album, since it fails to create a more varied structure that would have made perfect sense otherwise, given the overall duration of the track. With too few tempo changes, only the cleverly crafted chord changes that take place now and then keep this suite from becoming monotonous: anyway, the performers' finesse is always there, and all in all, this is a very good album. Recommended, though not a masterpiece.

This one is still a rather better output of them compared to these ones coming after. Of course not as strong as "Banished Bridge" or "Novalis".It's a bit reminiscent to CAMEL-Snow goose-era, which was one year before this one. Actually what I find mainly outstanding with this band, is not so much the instrumental section, which is good, but far from perfect, but they transforming very nicely lyrics of the german romantic poet with the same name (or to be correct the band is called after the poet). Maybe it's essential to understand the language or even to be a native speaker, to fully appreciate the beauty of their music. My favourite album of them is the self-titled one, especially the song "Wer Schmetterlinge lachen hört", but this one here keeps as well still the standard of that album. Actually there are few german bands with lyrics in their native language, I can appreciate, Novalis being the best of them, at least on their first few records. As a summary I'd like to say that this record might be considered as an essential one of the german prog scene and recommended to anyone who likes nice acoustic guitar combined with CAMEL-esque keyboards and german poetic lyrics.

If you purchase this album by the teutonic Novalis don´t imagine to find krautrock "cosmic" delirious excentricites, this "Sommerabend" is rather sobre, symphonic in structure and stays nearer to works offered by english bands as Camel...A few moody, acoustic interludes and their great sense of musical introspection can sometimes reveal some influences from this typical german krautrock heritage. They definitely put the stress on varied musical textures, including beautiful, enchanting epic melodies. Sometimes plaintive their music can illustrate as well the dramatic and grandiose poetry of Friedrich von Hardenberg Novalis (the song "Wunderschätze" includes a text taken from Novalis poetry). The music alternates moods and instrumentations in a clever sense, alawys expressed with a lot of feelings and an emotional regard on the content. "Sommerabend" also includes beautiful acoustic guitar parts. Sorry for the scpetics but the vocals are strictly in German. A very recommended album which deserves the attention of collectors. It also perfectly demonstrates than occasionaly german progressive musicians can make excellent symphonic rock.