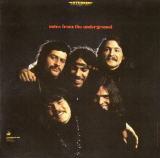 Richie Unterberger, All Music Guide : “Notes from the Underground's sole album was bound to draw comparisons with early Country Joe & the Fish, if only because they shared the same label and producer, and also came from Berkeley. Like the Fish and several other Bay Area psychedelic bands, they unpredictably blended jug band music, blues, good-time novelty-tinged humor, jazz, and electric hard rock. But where the Fish and others were able, at their best, to pull this off to create an intoxicating brew, Notes from the Underground sound relatively strained and eclectic-for-the-heck-of-it. The album's not without its fun moments and some period charm, like the brooding, driving "Why Did You Put Me On," with its very '60s-sounding organ swoops. Other highlights are "Tristesse," whose gentle folk-rock is slightly reminiscent of the early Youngbloods, and a rock treatment of Herbie Hancock's "Cantaloupe Island." But the lack of strong vocals and tunes keeps it out of psychedelia's front ranks, and the abundance of forced-sounding jollity unflatteringly dates much of the material.”