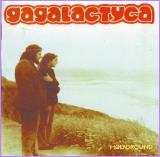 GAGALACTYCA has only been released on vinyl. It is a sister album to Astral Navigations. There are two "sets" of music : Chris Coombs and others (Lightyears Away), and Thundermother. Chris and Mike Levon wrote songs for the Light Years Away "side" of the album. Standout tracks are the short though beautiful "That Is What We Need", and "Cold Tired and Hungry" a storming track featuring Bill Nelson on guitar.

Thundermother come up with five brilliant tracks, four of them their own songs. Standout tracks are a version of "Woman" by the group, an acid guitar epic in "Come On Home", and the beautiful "Woman In My Life".

This is mainly the follow-up album to the highly collectable "Astral Navigations" album from 1973. Rare early '70's privately pressed spacey folky prog mostly recorded with a similar line-up to the Astral Navigations album. The music continues the same vein of spacey progressive folk music, and now comes with half a dozen bonus tracks from Thundermother - some of which are also quite trippy. Cosmic and rare as hell. ~ freakemporium.com

Only 425 copies of this album were pressed and it came with a free booklet. Despite its late release date it's actually comprised of previously unreleased early seventies material by the two bands, Lightyears Away and Thundermother, who were responsible for the Astral Navigations album. ~ The Tapestry of Delights" by W. Joynson