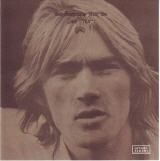 Gary Farr's solo debut was an attractive, if ultimately not distinct, late-'60s exploration into elegantly mystic folk, which gained enough of a reputation, helped by the presence of acts like Meic Stevens and Mighty Baby on the backing tracks, to eventually warrant a re-release on Sunbeam in 2008. If the newly expanded Take Something with You will ultimately only be of interest to committed fans of Farr and his collaborators, it's still a classic example of a labor of love, with the many demos and extra tracks spread over the two-disc effort providing as exhaustive an overview of Farr's early solo studio work one could want. The first disc consists of the original album itself plus three fair enough extras -- both sides of a one-off collaboration single with Kevin Westlake, the trippily flanged "Everyday" and an early version of "Green" later recorded for the album, and the rollicking "Hey, Daddy," his formal debut single shortly before the album's release. The second disc, meanwhile, consists of a slew of demos from both a couple of years before and one year after the album's release. In ways this almost warrants more attention than the original album, covering everything from the energetic "A Little Piece of Her," featuring Farr backed by the Action on a very T-Bones-like number, from 1970s "In the Mud," which would soon surface on his sophomore album Strange Fruit. While many of Take Something with You's songs appear as demos, a large number of the songs are otherwise unreleased, and while Farr's ear for melody and lyrics was often that of a good journeyman in the style, they do have moments, like the extremely arch singing on "Victorian Dreams" and the often amusing "Concerto for Men in the Country." The excellent liner notes cover a number of contemporary reports and appreciations, as well as a selection from Stevens' biography reminiscing about some work and performances with Farr and a warm, moving piece from his partner in the '70s, Carinthia West, about the first and last times she spoke with Farr before his untimely passing in 1994. ~ Ned Raggett, All Music Guide