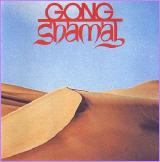 Daevid Allen has departed Gong and after a lengthy gap of about two years, at least a lengthy gap by seventies standards, the new, and dare I say it, improved Gong return with Shamal. By all accounts, the die hard Gong fans dismiss Shamal out of hand, while much of the rest of us consider it one of the better Gong releases. As far as I'm concerned it could well be Gong's finest album. The album is awash with lush arrangements and harmonious usage of vibraphone, xylophone and an fine array of percussive instrumentation and barely a guitar in sight, though the departed Steve Hillage does appear on two cuts. Intro song "Wingful Of Eyes" is hardly a good judge for the rest of the album. While it is musically solid, the vocals are poorly recorded which hardly aids the poorness of the whole vocal delivery in general, not to mention the crap lyrics. But the album progresses like no other Gong effort and minus Allen's mindless rantings of potheads etc... it is all the better for it. "Chandra" has often been touted as THE song of the album, but it is the B side opener, the superbly catchy and grooving "Cat in Clark's Shoes" which launches the band through a funky fused ride, but the following piece, a slightly melancholic and very emotive turn of "Mandrake" which is a real ear catcher, and personally the high point of the album. While the title track ends Shamal on a very high note. Even the distant recorded double vocal lines of Sandy Colley, and Mike Howlett I believe, work a treat as the tune rides along a slightly dark and impressive Howlett bass line. After the long drawn out and at times very erratic work on the Daevid Allen led trilogy of Gnomes and tea pots, Shamal works wonders and is a breath of fresh air. The new Gong mix it up with fusion and a hint of Eastern promise without any of the head scratching confusion when Mr. Allen led the band.