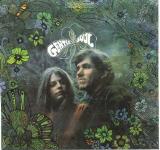 "As most folks have probably figured out from the album cover, Gentle Soul were a duo, composed of singers/songwriters Pamela Polland and Rick Stanley.
Prior to forming Gentle Soul, Polland had attracted attention as a songwriter, placing material with the likes of The Rising Sons and The Byrds (both whom recorded her 'Tulsa County'). In 1966 she became friends with Stanley. The two discovered they had a mutual interest in meditation, metaphysics and spirituality and began writing material together.
Signed by Columbia, the pair made their debut with the Terry Melcher produced 1967 single 'Tell Me Love' b/w 'You Move Me' (Columbia catalog number 4-43952). An attractive slice of California sunshine pop, the single did little commercially, but Columbia had sufficient interest in the duo to finance an album.
Also produced by Melcher, 1968's "Gentle Soul" found Polland and Stanley recording with an impressive all-star cast of studio players, including guitarist Ry Cooder, keyboardist Larry Knechtel, Jack Nitzsche and Van Dyke Parks. Musically the set's quite good. Interestingly, while neither Polland nor Stanley had great voices (Polland was the better of the two), when the two harmonized the results were quite attractive. They also displayed a knack for writing catchy California-styled sunshine pop - tracks such as 'Marcus', 'Song For Eolia' and "Renaissance" offering up a nice blend of folk, Baroque-styled pop and occasional lite-psych influences. Full of pretty melodies cloaked in rather elaborate arrangements (flute, harpsichord, etc.) and sporting sensitive and heartbroken lyrics, it's not exactly the year's most original release, but recalling the heyday of sunshine pop, tracks such as ''Young Man Blue' and 'See My Love (Song For Greg)' are mesmerizing. In spite of strong reviews the LP didn't do much commercially. One follow-on non-LP single (1968's 'Our National Anthem' b/w 'Song for Three' (Columbia catalog number 4-44152)) and their collaboration was over.
Polland subsequently recorded and toured with Joe Cocker on his infamous Mad Dogs and Englishmen trek. She recorded a pair of instantly obscure solo LPs for Columbia and eventually relocated to Hawaii where she now teaches music and hula dancing. Stanley turned his attention to woodworking and now owns a fairly successful business that manufactures Celtic harps."

"The Gentle Soul's sole album is suffused with pretty and wistful folk-rock tunes, deftly produced by Terry Melcher to incorporate dreamy orchestral instrumentation -- harpsichord, flute, and cello -- while retaining an understated subtlety. If you like the Stone Poneys, who made similar material in the late 1960s, there's no way you're not going to like this album. If you're sitting on the fence after that conditional recommendation, it might be too mellow for your tastes. If you want to know how exactly it might differ from the Stone Poneys, it's a little more on the soft-rock side, and definitely heavier on the male-female harmonies. All of which might be underselling the record, which is pretty attractive, though not astounding, on its own terms. That's probably Ry Cooder making his presence felt on the gutsiest and bluesiest tunes, "Young Man Blue" and "Reelin'," both of which feature excellent acoustic slide guitar. Although Pamela Polland and Rick Stanley sing and write well together, it's Polland whose personality comes through stronger, particularly as she takes the occasional unharmonized lead vocal and is the sole composer of one of the record's strongest tunes, "See My Love (Song for Greg)." Is this worth the three figure prices it commands on auction lists? No. But what is? It's decent music if you can get it.

It was finally reissued on CD by Sundazed in 2003 with the addition of nine bonus cuts, including all five songs from their late-'60s non-LP singles, an alternate take of the single "Tell Me Love," and three previously unreleased outtakes, among them the early Jackson Browne composition "Flying Thing." With the exception of a bluesy 1968 version of "2:10 Train" (also covered by the Stone Poneys and the Rising Sons), most of these have a poppier sound than the album, sometimes showing the influence of the Byrds and the Mamas & the Papas in the harmonies and guitar parts." ~ Richie Unterberger, allmusic.com