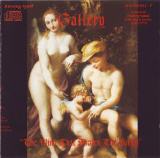 Very rare UK style folk rock, and another privately pressed folk rarity from the mid seventies. With fine guitar and mandolin work from Steve Morrison this is classic UK '70's hippy folk with a traditional edge. Also includes extra unreleased material from an informal rehearsal in 1969 by the band.

Bruton Town Newsletter comments on this item :
"It is a beautiful record, released on MIDAS label in 1972. In my research I've found only one of the personnel names, the female voice, Barbara Seabourne. The record title is "The Wind That Shakes The Barley" (Kissing Spell KSCD9503-f) and some of you could instantly remember the Dead Can Dance late version of this beautiful traditional here included. On the KS version there is also a 20 minute bonus track that was recorded in 1969 (so the record notes).
Seems that this MIDAS label pressed also a record from a band named "Folkal Point" and two solo records from a certain Janet Jones.
The Gallery sound is not "acid" folk, but more traditional stuff, well clever done."

"The Gallery album is superb IMO. The label was set up by Alan Green who was also behind the Folk Heritage / Westwood labels. Gallery is phenomenally rare as an original LP (About £1000). Equally as rare is Folkal Point (note by tjani: I have this magnificent record, a bad scratchy vinyl rip coming straight from Patrick "The Lama" collection. A lossless copy of this item could be a dream...) (Even the band only have one copy between them!!) Janet Jones did 2 for the label and both are more common, but excellent".

Actually the members of the band were: