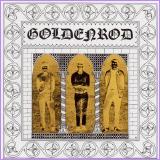 First official reissue of this legendary West-coast acid psych masterpiece. It was recorded 1969 in Hollywood and originally released on Chart maker. Golden Rod is not just the backing band of Darius-it is Ben Benay, Jerry Scheff and Toxey French who were involved into several major projects, playing with Elvis Presley, 5th Dimension, supporting The Doors. Ventures to name a few. On this album they let it free wheeling running-just caring about their own passion with a magical sound in 4 long cuts. DESCENT OF THE CYCLOPEANS/KARAMIC DREAM SEQUENCE THE GATOR SOCIETY/STANDING OVALUA- TION-those satisfy by it intense and emotional sound with ultimate guitar work by Ben Benay. Contains band story & photos. Plus an unreleased mono session of album outtakes, a freaked out 70 minutes.

From Los Angeles, Goldenrod were part of the "Our Productions" crew, along with Mike Deasy, Lee Mallory and Curt Boettcher. As part of this talented group of people, they contributed to numerous albums and sessions in addition to those released as Goldenrod. Some of these included Tommy Roe, Darius and backing the Association on their first two albums. Much of this session work was done on a "conveyor belt" system; with all the instrumental tracks being cut at Gary Paxton's studio, and vocals for the more well known acts cut at Columbia.

All three had earlier played with Ballroom with Boettcher and together with Mallory, they formed the basis of the original line-up of Millennium. Scheff contributed Dandelion Wine to the Millennium repertoire, but all three left when it looked like Millennium would turn into a 'proper' band rather than a studio project. Goldenrod are also thought to have backed Lee Mallory live.

The Goldenrod album contains four elongated tracks consisting of extended and improvised jamming with mystical titles, such as Karmic Dream Sequences and Descent Of The Cyclopeans. The former was written by Curt Boettcher and Lee Mallory, and was later also recorded by Millennium.

Apparently the group first met while they were recruited to back The Fifth Dimension and they all went on to become top L.A. session men; Scheff also went on to back Elvis Presley and Benay appeared in Fun Zone in the seventies.