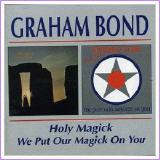 Graham Bond - Holy Magick & We Put Our Magick On Y

Graham Bond was getting more into "magick" in his private life at the beginning of the '70s, and those interests are heavily reflected in this album. That's particularly true of the side-long medley that occupies the first half of the LP, with its attempts to musically re-create rituals. The problem was a mundane one afflicting many ambitious concept albums of the era: the music wasn't as interesting as the concept. It was meandering, sometimes improvised-sounding blues-jazz-soul-rock, featuring Bond's distinctive organ, female soul backup vocals, and John Gross' tenor sax. The irony was that it actually didn't sound as sinister as Bond's more demonic recordings in the mid-'60s as leader of the Graham Bond Organisation, even though those earlier recordings had no explicit magickal references in the lyrics. Nor was it nearly as effective or memorable as the voodoo rock of early Dr. John, an unavoidable comparison as far as the mood for which Bond seemed to be aiming. For side two, Bond returned, nominally at least, to a more conventional song-oriented format, presenting four songs on as many tracks, though with a similar lyrical focus. These pieces weren't too different from the other side, however, though there was a bit more of a funky, earthy blues feel.