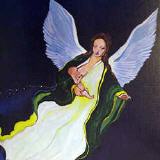 Little known US acid psych killer from 1975 that's somewhere between Kak, Quicksilver and Bob Smith. Fantastic guitar work that swoops and rings like the best Gary Yoder or John Cipploina and a breathtaking production that utilizes orchestration to add to the atmospherics. "First reissue (from the mastertape) of this lost Westcoast monster rarity with the blend of those early S.F. bands like Tripsicord Music Box, Quicksilver Messenger Service, Kak, etc.

There is a fantastic songwriting with a cosmic timeless feeling. Garrett's falsetto voice and singing is beyond words and the guitar leaves you crying on the right or wrong day. Cover artwork is one of the best artistic statements ever made for a record -- an angel mother breastfeeding a baby in cosmic space, the losing milk drops from her breast are forming a milky way. CD release contains 5 bonustracks and bio of Garrett."