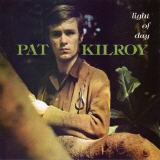 The songwriter of STEPPENWOLF´s - "The Magic Carpet". In the same year that Elektra broke down barriers by releasing Love’s DA CAPO, The Butterfield Blues Band’s EAST/WEST and Tim Buckley’s debut, they, with less ceremony, thrust Pat Kilroy’s one and only album onto an unsuspecting world. Kilroy edges out David Stoughton as most uncommercial “folk” or “rock” act on the label. On the front cover of LIGHT OF DAY, he looks a bit like a cowboy, but a look at the back will inform potential buyers that we’re not in Hank Williams territory. The album begins with a song called “Magic Carpet,” ends with one called “Star Dance” and also includes the titles “The Pipes Of Pan” and “Vibrations.” The liner notes reference Hebrides’ Islanders’ chants, “Moods of Spanish gypsies,” “the magnetic pulsations of African hypnotic drums,” music of India, dances of the Middle East, the writings of Hesse, Huxley, George Gurdjieff, and, most importantly, the Sufi Message. In the year before the summer of love, he ends the notes with the single word “peace.”

It’s no surprise, then, that the music tests previously uncharted waters, and as with an equally unique 1966 album, THE PSYCHEDELIC MOODS OF THE DEEP, it goes places where no one would go again. The Deep’s album invented psychedelic music without any noticeable influences, but went unnoticed when the genre exploded via well-known artists. Kilroy invented acid folk, though, unlike the Deep, he didn’t do so intentionally. The difference is a significant one because there’s no artifice or sense of exploitation in Kilroy’s music. (This isn’t a knock on the Deep’s album, which I think is even better than this, even if it’s not 100% “genuine”). Regardless, nobody heard this album either, and the wave of psychedelic folk-rock and singer-songwriter types who followed would come from completely different mindsets.

The most likely reason Kilroy hasn’t yet been discovered by a tongue-wagging gaggle of collectors (as have, for instance, Jake Holmes and Chris Lucey), is that, admittedly, LIGHT OF DAY is more experimental than it is “good.” Kilroy’s songwriting is rudimentary here, fragmented there. The rhythms are awkward, his blues excursions unkempt. His singing is not pretty. As original as several of these songs are, the others seem like less inspired rewrites of the better ones. The lasting impression of this record is that it’s headed somewhere really interesting but only makes it about halfway there. Of course, half of “really interesting” still makes a more satisfying and memorable listen than 90% of the stuff that has been reissued. Some of the album’s more inspired moments: Kilroy sings about “the sea of the unknown” (the album is full of water and air/space imagery), the “road of sorrow,” and “the crossroads of tomorrow and yesterday,” and often dispenses with actual words in favor of chants, moans and other seemingly random sounds. His freaked out falsetto on “Roberta’s Blues” mixes with blues harp and tabla (there are no rock drums on this record) to turn a pedestrian blues song into an elsewhere unheard mix of genres. This is the kind of thing that would be an instant “what the hell is that” type of standout on a label sampler. On “The Pipes of Pan,” Kilroy uses a Jew’s Harp as if it’s a true blues instrument. Some of the flutes on the album do, indeed, sound like the pipes of Pan. The acoustic guitar on “Cancereal” explores some of the same ground Perry Leopold would perfect four years later on EXPERIMENTS IN METAPHYSICS, the album that coined the term “acid folk.” Kilroy’s tuneless yodeling and arrhythmic strumming on this song tread a fine line between genuine innovation and just fucking around.

Every third time I listen to it I think it’s a work of genius. Mood music, you might call it. While it’s easy to look at this and wonder what might have been if he were a better songwriter or a more focused performer, a more realistic assessment is that LIGHT OF DAY is every bit as good, inspired and unique a work as you could possibly expect from a man of limited vocal, instrumental and creative talents. In other words, a treasure. It gets 7 out of 10 from me, but I won’t be surprised if maybe 5% of you will put it on your desert island list.(review by Aaron Milenski) at: http://www.lysergia.com