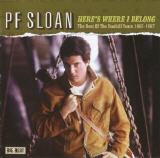 Lou Adler, the legendary producer and mogul who founded Dunhill Records, once told a reporter, "I gave Phil Sloan a pair of boots and a hat and a copy of the Dylan album (Bringing It All Back Home), and a week later he came back with ten songs, including 'Eve of Destruction.'" It's all but impossible to imagine P.F. Sloan's music without Bob Dylan's guiding influence, and in many respects he was the West Coast music biz's response to the wordy insouciance of Dylan's pre-motorcycle accident songs, but though the similarities are unavoidable, the comparisons also sell short Sloan's genuine talent as a songwriter. Sloan enjoyed a successful career as a tunesmith years before he wrote "Eve of Destruction," and if the success of Barry McGuire's recording of that song changed the direction of Sloan's career, there's a freshness and emotional honesty to his writing that shines through no matter how much he leans on Dylan's template, and at a time when the Bard of Hibbing's lyrics became increasingly abstract and elliptical, the directness of Sloan's broadsides about love and the state of the world felt potent and refreshing. P.F. Sloan recorded two albums and a handful of singles for Dunhill before he was dropped when his sales as a recording artist failed to match his success as a songwriter, and nearly all his work for the label is featured on the CD Here's Where I Belong: The Best of the Dunhill Years 1965-1967. Unlike many songwriters who failed to make an impression as a performer, Sloan was a fine singer whose interpretations of his own work easily stand beside those of others who enjoyed hits with his material (Sloan's take on "Eve of Destruction" is at once more subtle and urgent than McGuire's), and the best stuff here ranks with the top echelon of L.A. folk-rock of the period. All 12 songs from Sloan's debut LP, Songs of Our Times, are included (in their original sequence), but while only ten of the dozen tracks from the follow-up, Twelve More Times, make the cut, they sound more ambitious and are given a more full-bodied production that stands the test of time a bit better than the spare arrangements that dominate the first album. Five non-LP single sides round out the disc, which find Sloan dipping his toes into psychedelic pop with surprising success. Sloan would make only one more album during the '60s, and only three more after that as of 2008, making Here's Where I Belong a nearly definitive overview of Sloan's most celebrated period, as well as a fine summation of his most influential work. (Mark Deming, All Music Guide)

A seminal figure in the evolution of West Coast pop, singer/songwriter P.F. Sloan composed and produced some of the most enduring records of the 1960s. While his solo efforts remain folk-rock cult classics, they were barely promoted by longtime label Dunhill, and his subsequent exit from the company was the start of a fall from grace that culminated in a three-decade absence from the studio. Born Philip Gary Schlein in New York City on September 18, 1945, he spent the lion's share of his adolescence in Los Angeles. While browsing the Sunset and Vine music store Wallich's Music City, the 12-year-old met Elvis Presley, who agreed to an impromptu introductory guitar lesson. Within a year Sloan signed to Aladdin Records, issuing his debut single, "All I Want Is Loving," to little notice. The Mart label effort "She's My Girl" met a similar fate, but in 1961 he resurfaced as a staff songwriter with Screen Gems, which teamed him with fellow composer Steve Barri under the supervision of producer Gary Usher. As the Fantastic Baggys, Sloan and Barri capitalized on the budding surf craze with "Tell 'Em I'm Surfin'." They also co-wrote the Round Robin hit "Kick That Little Foot, Sally Ann," and when Screen Gems exec Lou Adler broke ranks to found his own label, Dunhill, he brought Sloan and Barri with him to write and produce. Throughout the mid-'60s, the Sloan/Barri partnership proved a hitmaking force to rival the likes of Bacharach/David or Goffin/King. Smashes like Johnny Rivers' "Secret Agent Man," the Turtles' "You Baby," and the Grass Roots' "Where Were You When I Needed You" were instrumental in defining the sound of Southern California rock & roll.

Sloan's most influential composition was the Bob Dylan-inspired "Eve of Destruction," a number one hit for Barry McGuire in the fall of 1965. The song, which drew fire from conservatives and liberals alike, nevertheless became one of the defining protest anthems of the growing counterculture movement, and its success spurred Sloan to renew his own recording career in full. His comeback effort, "Sins of a Family," a bleak, poignant tale of teen prostitution, spent less than two weeks on the pop charts in late 1965, and the LP Songs of Our Times suffered backlash from a folk-rock community that dismissed Sloan as little more than a studio hack jumping on the latest commercial trend. Moreover, Dunhill execs blanched at the thought of losing their most successful songwriter, and spent virtually nothing on promoting his solo career. A 1966 follow-up set, Twelve More Times, fared no better, and a frustrated Sloan demanded release from his contract. Dunhill finally agreed, but forced him to sign away all songwriting royalties past, present, and future. Sloan's talent and integrity inspired fellow pop tunesmith Jimmy Webb to write a glowing tribute, "P.F. Sloan," but he remained persona non grata on the pop charts. His 1968 Atco debut, Measure of Pleasure, tanked, and he relocated to New York City, moving in with his parents and plotting his next move. Sloan did not resurface until 1972, releasing the much-maligned Raised on Records on the tiny Mums label. In the decade to follow, he battled depression and catatonia, finally resurfacing in 1985 with a handful of New York club dates. Sloan nevertheless resisted overtures to cut a new LP until 2006, teaming with producer Jon Tiven and guests including Lucinda Williams and Frank Black to record the Hightone release Sailover. (Jason Ankeny, All Music Guide)