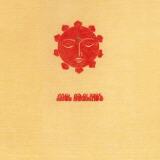 First CD reissue of a very obscure Japanese private press folk album from 1973. Australian artist Paul Adolphus recorded the album in Kyoto/Japan, playing guitar, vocals, flutes, shakuhachi. Totally vibed-out "personal" folk-psych. "My first visit to Japan was in 1968 after living in India and Sri Lanka. My wife at the time arrived in Kyoto, and had our first child there. We really loved it. We returned to Sweden then went back to Kyoto and had our second child there. We lived in a 200 year old farm house in a village outside Kyoto. It was a great scene at the time. Japanese artists, bohemians, and visiting foreigners making art, music, poetry, etc. I was playing music with different people, then developed a musical relationship with Mitsu Harada. We did concerts and toured to other cities in Japan together. Before leaving Japan, Mitsu organized to record the album together. Mitsu's father was the grand master of a calligraphy school. In a large room in the school, Mitsu set up mics and a big stereo recorder consul. Most of the playing was by Mitsu and myself, an American friend played a little guitar and percussion to fill some holes. A group of friends sat around, so it was a bit of a living room concert feel. It was my material, Mitsu engineered as well as playing. I think there were 200 copies pressed, the covers were hand made, so it was released into the small arts community of Kyoto and Tokyo. Not long after the recording, I travelled with the family to Australia, I had been away from here for a decade. I worked on a lot of projects here, composing for theatre and dance. I had a group called Living Music -- an African drummer, Indian tabla, didjeridoo, winds, etc. It was early days, not too many people were ready for world music." Incredibly rare and sought-after mellow folk album with beautiful songs and harmonies, like a Japanese version of Extradition. (amazon.com)