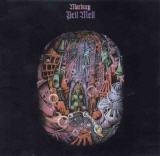 1972 first release by this German Bacillus band, featuring lots of great heavy
organ and guitar work, vocals, bass and drums, as well as touches from violin,
flute and mellotron. "Marburg saw a unique combination of psychedelic and
progressive sounds, complex and lyrical, with subtle classical touches handled in
a manner rivalling the best Italian releases of the era. A unique touch was the
two lead vocalists, each with a distinctly different style..."-The Crack In The
Cosmic Egg

This album IS a masterpiece of heavy, complex, unusual, highly imaginative, and
powerful organ dominated heavy symphonic progressive rock. Unlike what some write
ups say this is not at all mostly instrumental. The vocalist (Rudolph Schon) is
prominent on every track except the lovely instrumental "Moldau" and his raving,
manic, strong, and commanding approach is awesome. He sounds like no other
vocalist I can think of and when there are harmonies it is really impressive.
Aside from the astounding first track there is no guitar here, and one of the
things to truly make Pell Mell's first album exotic is the violin and organ
dominated instrumentation. The songs are fantastic- full of atmosphere, energy,
contrast, and imagination. When I am hearing the longest tracks on this album none
of them drag a bit and there is constantly something new and different going on.
Classical influences are prevalent, but I would disagree that the band are ripping
off famous classical composers. I see the few very easy to pinpoint references as
a homage rather than a rip off. I have trouble understanding the lyrics to a lot
of these songs. They are in English, but heavily accented and rather strange!
Perfect example is "City Monster." The title alone tells you these guys were a
little bit different in their very European (namely German) take on progressive
symphonic rock. The musicianship here is something to be marvelled at, but
ultimately it is the raw and unusual vocals that make this album so great when
they are combined with how good each individual player in the five piece band is.
The drummer is excellent, and so is the bass player. The organist and violin
player are never self indulgent and always exciting. For long tracks full of
symphonic overtones and heavy psychedelic rock lurking in the shadows this is one
of the best albums I've heard. Every track is outstanding (There are only 5), and
this one is highly reccomended!