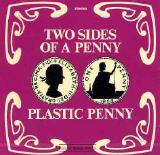 Plastic Penny was originally formed from the ashes of The Universals in 1967. Vocalist Brian Keith, bassist Tony Murray and keyboardist Paul Raymond, along with guitarist Mick Grabham and drummer Nigel Olsson took their debut single, a cover of The Box Tops' Everything I Am to the U.K. Top Ten in the winter of '67. As their follow up single Nobody Knows failed to chart at all, Keith quit in the spring of '68 with Raymond and Olsson sharing the vocal spot. The group released Two Sides Of A Penny in '68 which was followed by a handful of singles that included Your Way To Tell Me To Go and a rocked up version of Hound Dog later in the year. After their 1969 album, Currency, the group went their seperate ways. Paul Raymond would join Chicken Shack and Savoy Brown before pounding out the keys with UFO, Tony Murray would join The Troggs, Mick Grabham formed Cochise with future Foreigner bassist Rick Wills (Grabham would later join Procol Harum).
Nigel Olsson joined The Spencer Davis Group before settling in for a short spell with Uriah Heep and then Elton John. (taken from rant58.tripod.com/id417.htm)