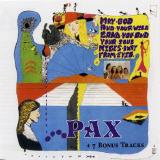 From Sixties Peru this South American hard rock band kick up a riot . with both traditional and Western influences. A stylish set of heavy and hairy psychedelic rock with poppy outbursts. Leader Pico Aguirre was previously with Los Shains and this album dates from 1970.

Pax is the Latin word for peace. The band were formed by former Los Shains' leader 'Pico' Ego Aguirre. Jaime Moreno was brother of the famous Peruvian pop singer Gustavo 'Hit' Moreno. U.S.A.-born Mark Aguilar was a multi-instrumentalist living in Lima at the time and a friend of Moreno's. Miguel Flores, from Cuzco, was a superb drummer and a charismatic musician. Gerardo Rojas handled vocals on one cut Mr. Skin.

Their repertoire was hard rock / heavy metal with vocals in English. On the Dark Rose compilation there's a great cover of Smoke On The Water and decent versions of Radar Love and Mr. Skin. Their other finest moments including the opening cut Firefly, with some superb guitar moments; Dark Rose, which has a melodramatic introduction and lots of guitar histrionics; Exorcism, with its funky guitar work and gruffer vocals and Sittin' On My Head, which sported another good guitar intro.

Along with Tarkus they were the only hard rock / heavy metal orientated group from Peru. The original line-up played from 1970-72, but there were several subsequent line-ups.