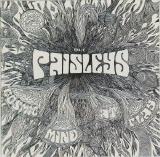 The Paisleys were formed in Minneapolis, and their sole album was produced by Warren Kendrick, who produced a bunch of other garage rock and psychedelic recordings in Minneapolis in the mid-'60s to early '70s (most notably for the Litter).

The Paisleys actually helped Kendrick build the studio in which Cosmic Mind at Play was recorded, and only a couple of thousand copies were pressed when it was released in 1970

A lightweight (though not totally embarrassing) effort that put the electric keyboard more to the fore than many similar bands did; it found a greater audience when it was reissued for collectors on LP in the 1980s.

A bit of irreverence pokes through in the Lothar & the Hand People-like phasing/electronic squiggle effects of "Now" and the Bo Diddley beat and simulated orgasmic squeals of "Diddley," though the harpsichord-textured "Wind" is a half-decent journey into the more ponderous, droning side of the psychedelic experience.
~~~~~~~~~~~~~~~~~~~~~~~~~~~~~~~
The Paisleys were a Minneapolis garage-psych band that formed in 1968. Original members included Rick Youngberg (guitar, vocals), Rick "The Wizard" Timm (bass, vocals), Bill Smith (piano, vocals) and Greg Payton (drums, vocals).

In late 1968, they decided to pack up and move to Canada where they camped around and gigged predominantly in the Vancouver area. Due to fear of being deported back to the U.S. and into the Vietnam draft, Youngerberg left the group. Payton had a nervous breakdown and also left and was replaced by Bob Belknap (drums, vocals).

In 1969, Smith, Timm and Payton moved back to the U.S. and held auditions for a new lead guitarist and found Brad Stodden. They then began recording their sole LP, "Cosmic Minds At Play". Halfway through recording the album, Belknap was replaced by Mike Cornelius (drums, vocals). It's this lineup that recorded the outstanding 'Something's Missing', which is one of their best songs, but ironically never made the LP. Only 2,000 copies of the record were pressed and when it didn't sell well, the band soon split. (techwebsound.com)

The Paisleys' sole album is period, late-'60s psychedelia, the kind that's not bad when you listen to it once in the background, but is hard to recall with any specific detail after it's been shelved. More based around relatively light electronic keyboards than many other similar records of the era, the songs are heavily colored by naïvely cosmic lyrics whose sentiments are easier to admire than they are to hear verbalized. A bit of irreverence pokes through in the Lothar & the Hand People-like phasing/electronic squiggle effects of "Now" and the Bo Diddley beat and simulated orgasmic squeals of "Diddley," though the harpsichord-textured "Wind" is a half-decent journey into the more ponderous, droning side of the psychedelic experience. The short songs on side one work much better than the 18-minute "Musical Journey" opus that takes up all of side two, including a pit stop for a mock baseball broadcast. [The 2003 CD reissue on Sundazed adds six bonus tracks, all but one of them previously unreleased, from 1968-1970 demos, outtakes, and live recordings.] ~ Richie Unterberger