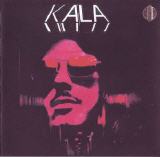 Although their evangelism in retrospect might seem to be a bit over the top, the music retains its beauty created by some highly individual souls. They rehearsed in All Saints Hall which was a converted church near Portobello Road, and recorded 3 albums for Island Records between 1969 and 1971. two further albums were recorded in 1972 for RCA. The 'Self' entitled first of these was their best with studio material on side one, and the band playing live at Exeter University December 11, 1971 on side two. Their live set was usually mostly improvised as they avoided playing the same riff twice or going into a routine thing. Not unlike the Grateful Dead, they did a lot of collective jamming with an intention to trance out their colourful audiences by a forceful combination of the chanting of mantras with the Krishna flute lines and the lyrical guitar soloing. Often the local Hare Krishna disciples would provide an extra percussion section to the already steamy proceedings. Quintessence had their household guru in Swami Ambikananda. They built a reputation on solid club work and were deemed London's Underground Sensation in 1970. Besides appearing at the first two Glastonbury Festivals (then called 'Faires'), in 1970/71, they also were invited to play the Montreux Jazz Festival at a time when jazz was still being played there. At their peak they sold out the Royal Albert Hall twice.

Although Quintessence played many hundred of concerts and festivals all over Europe, they never made it to the United States. Although a concert at New York's Carnegie Hall was already lined up in early 1972, they didn't make it because Shiva and Maha Dev were asked to leave the band by Raja Ram in spring 1972. Shiva and Maha Dev went on to form the short-lived outfit called Kala. With ego clashes and problems on many frontiers, Kala quickly folded and Quintessence, now trying to make it the body without a head, and bereft of a sense of purpose, direction and being victims of the changing times, played on into the eighties, then slowly drifted into limbo.

And a bit about the band KALA, from the same source:
[quote] "The band turned down a US record deal negotiated by Chris Blackwell (Island Records) and didn't play at Carnegie Hall or tour the USA because four of its members wanted a larger monetary advance. This disappointed Chris Blackwell greatly and he dropped the band from the label. The band signed with RCA and recorded one album with Shiva and Maha Dev. Raja Ram unexpectedly 'fired' Shiva and Maha Dev after that album with RCA was recorded.

"The 'real' reason that Shiva's band Kala broke up was because Bradley's Records (a subsidiary of ATV) changed their policy towards their artists. They no longer wanted bands to make albums and insisted on them being singles pop artists. They wanted Shiva to wear a 'glitter suit', and when he refused, the senior management of ATV broke up the band by taking all of the equipment back and canceling their dates. It had nothing to do with 'ego' clashes. I don't know where this 'Nik' got his info from." - directly quoted from Shiva/Phil Jones