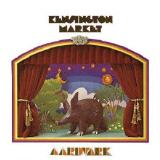 Aardvark is a 1969 psychedelic rock/pop album, from Canadian band Kensington Market. It is often considered a forgotten gem.

Kensington Market were a Toronto band that recorded two albums in the late 60s. Aardvark is their second album, which a reviewer said has "pop instincts and solid songwriting". In 1969 the band released their final lp titled Aardvark. After the release of this disc the band broke up a few months later, leaving behind a much stronger lp than their debut.

Aardvark is a weird and wonderful mini masterpiece in which much of the Kensington Market’s reputation rests. Many of the album’s ideas are fully formed and well thought out.

Some of the songs, like the beautifully trippy Cartoon and the ahead-of-its-time Help, use primitive synthesizer in all the right ways. Help sounds like a lost Flaming Lips track with its open arrangement and blissed out guitar playing.

Side I Am would have had radio potential had it not been for the experimental Smile-era Beach Boys intro. It’s a stunning pop song with Penny Lane horns, fine vocals and that special, inspiring 60s magic.

Other tracks like Think About The Times and If It Is Love have more of a meloncholy air but are equally excellent and reveal a more pessimistic side of the band. The experimental Americana of Half Closed Eyes is another standout composition that’s superb in an early morning folk-strum Dylan way with unusual synthesizer flourishes.

Aardvark requires a few close listens to sink in but it really is a great Beatles influenced pop album by an underrated band.