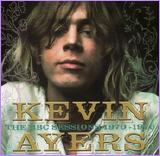 Review
It’s always interesting to wonder what might have happened if a specific event in the history of a band hadn’t occured. What would Soft Machine—a group ultimately more associated with jazz/rock and fusion—have become had original bassist/vocalist Kevin Ayers not left the band after an exhausting North American tour opening for Jimi Hendrix? Given Ayers’ psychedelic and pop leanings, would the group have evolved the way it ultimately did? Or would it have continued on a more song-oriented path which, given the large influence it would have on other like-minded groups to come, like Hatfield and the North and Caravan, might have significantly altered the landscape of the British progressive movement?

That's a question that can never be answered, but fortunately Ayers would continue on solo, releasing a number of highly-regarded albums, including Joy of a Toy (1969), Whatevershebringswesing (1971), and Yes We Have No Mañanas (1976). Over time the psychedelic references that yielded inevitable comparisons to Pink Floyd’s Syd Barrett would disappear, to be replaced by a more straightforward singer/songwriter sensibility. But his distinctly British sense of humour—an absurdly whimsical look at life that has unfortunately also caused him to not be taken as seriously as he deserves—has remained intact. Nowhere is this more evident than on The BBC Sessions 1970-1976, a generous double-disc set that collects eight sessions recorded for the British Broadcasting Corporation over a six-year period.

The first ten tracks on disc one, recorded over three sessions in 1970, present the more psychedelic side of Ayers, with material culled from Soft Machine’s Volume One (1968), Joy of a Toy (1969), and Shooting at the Moon (1970). Backed by Soft Machine alumni like drummer/vocalist Robert Wyatt, bassist Hugh Hopper, organist Mike Ratledge, and saxophonist Elton Dean, the first four tracks also include other players peripherally associated with the Softs, including trombonist Nick Evans and flautist Lyn Dobson. But while “Why Are We Sleeping,” from Volume One, inherently feels like a Soft Machine tune, the rest of the material is pure pop. Ayers’ deep voice and wry delivery make it work, and the hippie vibe of “Clarence in Wonderland” and the pure shtick of “You Say You Like My Hat” are curiously appealing.

Comparing versions of the melancholy “Lady Rachel” and the raucous “Stop This Train” from 1970 with the better-recorded versions from 1974 best demonstrates how Ayers had evolved into perhaps a more conventional tunesmith in the space of a few short years. In many ways, while the 1974 group is better rehearsed and clearly more cohesive, Ayers’ earlier sloppy and almost anarchistic way of working retains a greater charm. But even the country-rock leanings of “Shooting in a Bucket Blues” can’t mask Ayer’s self-effacingly confessional writing style.

While Ayers would continue to record sporadically in subsequent years for a variety of labels, his early days are what he’ll be best remembered for. The BBC Sessions 1970-1976 is essential for existing fans, and a good cross-sectional starting point for those seeking a first-time introduction.