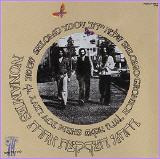 
I would like to recommend one of the better progressive rock bands that was ever created. The Hebrew name of the band is Kzat Aheret (in English this translates to "A Little Different"). But besides the Hebrew name, on the album cover, there is one more name - "Nonames". They are a band that was created in Israel in 1974, by a three very talented musicians and composers; Shem-Tov Levi-flute and voices [mainly], Shlomo Ydov-guitars and voices [mainly], Shlomo Gronich-keybords and voices [mainly]. I write "mainly" because they played many more instruments like drums and string instruments. A very astonishing band for Israel in those days. They were experienced in many progressive styles, like a very sophisticated psychedelic style, with classical and extravagant improvisations and forms, with melodic and dissonant melodies, and with a theatrical style of humor in many episodes, and sometimes were influenced with their own folk music. They used great orchestration. They released their only album in '74 and published many singles. - New Gibraltar Encyclopedia Of Progressive Rock

...Another important artist who emerged by 1971 was Shlomo Gronich, son of a music teacher and a child prodigy. He grew up on classical music until he discovered the Beatles. After his army service, he became professional and by 1971 his first album "Why Didn't You Tell me?" was released. This was the first Israeli prog-rock album and a very revolutionary work. It comprised many facets of his complex music and personality. The influences were numerous from his classical background through Jazz, Underground rock, traditional Jewish music, Cabaret music and the title track, which captured him screaming, crying and freaking out on the piano and vocals. The album had a very desperate atmosphere and it is an essential album for everyone who wants to hear the development of Israeli prog.
The album failed commercially, and Gronich went on collaboration with another talented musician Mathi Caspi. Caspi who had a similar background was a composer/arranger/producer and multi instrumentalist. They started writing songs and touring, the result of this collaboration was "Behind The Sounds" another milestone of Israeli prog. This live album featured Gronich on piano and vocals and Caspi on acoustic guitar and vocals and in spite of the scarce instrumentation, they managed to create a full and compelling sound. The music included the usual blend of Classical music, Jazz, Cabaret music, Rock and even some Brazilian influences, it ranged from the beautiful to the frightening, from rather accessible songs to sheer avant-garde. This is another essential Israeli prog album.
After this, Caspi had gone solo and gradually abandoned rock, concentrating on other directions such as bossanova, reggae and so on. The two reunited for a tour and another album by 1984, but this was rather disappointing.
By 1973 Israel had been attacked by several Arab countries, which led to a terrible war The Yom Kippur War, this war was very traumatic for the Israeli people and put a stop to all musical and cultural activities in Israel of that era. After the war, many artists had tried to express their pain. Gronich had teamed up with two other talented youngsters Shem Tov Levy and Shlomo Ydov. With Gronich on keyboards, percussion and vocals, Levy on flute, keyboards percussion and vocals and Ydov on guitars, bass, percussion and vocals and with assistance from several session musicians they recorded a brilliant album under the name Ktzat Acheret ("A Little Different") or as they called themselves in English "Nonames". This album had reflected some of the pain and anguish of the Yom Kippur war and was very varied musically. The group at this stage was very influenced by groups such as Gentle Giant, Yes and The Mahavishnu Orchestra and it was reflected in their music, but they also add their own dose of Jazz, Classical Avant-garde and Middle and Far Eastern music. This album is a masterpiece of Israeli prog and is essential. After a while, the band split due to Gronich's departure to USA... - The History O Israely Progressive Rock by Gil Keltch, New Gibraltar Encyclopedia Of Progressive Rock

I would like to thank my friend Gil for introducing me to an expanded 70s Israeli prog scene, and a wonderful prog album by the band Nonames(or Ktzat Acheret as they are known in Israel). Like most prog collectors in the US, Europe, and South America the only Israeli prog/psych bands that I was aware of for many years were The Churchills, Zingale, and Sheshet. But the 70s prog scene in Israel produced dozens of albums, by two dozen bands or so, that collectors will want to get their hands on. Nonames was a mid-70s project led by charismatic composer/singer Shlomo Gronich, and his friends Shlomo Ydov and Shem Tov Levy. Their only album together, released in 1975, is a classic. The new listener will quickly notice a natural mix of prog, classical, jazz, country/folk/rock guitar, traditional Jewish music(Eastern European), and Israeli folk. The ease that the 3 musicians play various styles of music can be compared to Gentle Giant, yet Nonames aren't as tricky as they favor a mellow, laid-back, attitude that reminds me of Quella Vecchia Locanda and similar Italian bands. Dozens of musical instruments appear as the album unfolds which include traditional guitar, bass, and drums along with piano, flute, acoustic guitar, violin, Moog synth, and mellotron. What really impressed me, was how unpredictable most of the melodies are. As soon as your ears guess that one of the musicians will hit a certain note, he instead goes for an unexpected note, chord, or scale. The instrumental sound is full, yet sparse(yes, the description seems like a contradiction, but it fits perfectly) and colorful. The vocals throughout the album are beautiful. The majority of the album is in Hebrew, and 2 tracks are in English(I prefer the Hebrew vocals, but the English tracks are ok). The vocal interaction between the 3 musicians has a 70s style that reminded me of a mixture of I Giganti, Quella Vecchia Locanda, and the gentle style of Gruppo 2001. There is also a humorous aspect to some of the tracks, which gives their sometimes "serious" sections a release. The humor is easy to catch if you don't know Hebrew, because it's more theatrical in nature. Overall, what a find! I'm surprised that this album has never been mentioned within the prog community until now; international prog collectors, and especially fans of Italian prog, will love the music here. - taken from MIO Records review