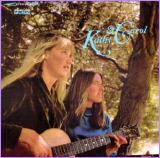 "The arrangements are their own, and usually reflect good taste, curiosity and musical intelligence. These elements add up to a very good cd reminiscent of early Joan Baez and Judy Collins." - Dirty Linen

"(Their) fleeting sound is definitely something folk buffs will want to hear." - Mojo (4 stars out of 5)

In a literal sense of the word, they are traditionalists boasting unmatched interpretive skills. Although the performance style is on par with the likes of Joan Baez, Carolyn Hester, and Bonnie Dobson, the amalgamation of voices creates an ethereal timbre permeating every line. The closeness and precision of their harmonies is difficult to accurately describe. There is an intimacy and timelessness that lends itself well to the lovelorn and chaste "Sprig of Thyme," or the infusion of a disparate version of the Francis Child ballad "Lady Alice" on "George Collins."

While McComb and Larisch are self-taught, the complexity within the grooves of the Carter Family classic "Gold Watch and Chain" indicates a sophistication and presumably innate musicality that, simply stated, cannot be taught. Kathy & Carol also illuminate the Carter Family's "Carter Blues," a song that, according to the notes on the rear of the original LP jacket, was learned via Mike Seeger. The ladies give it a propitious and youthful visage that practically defies the lyrical content, building instead upon an effortless delivery. The a cappella numbers, "Wondrous Love" and "Blacksmith," are similarly distinguished by a virtually intangible and otherworldly quality as the focus lies solely on the pure blend.

Arguably, the most familiar melody on the album is "Just a Hand to Hold," perhaps better-known as "He Was a Friend of Mine." The adaptation here is credited by way of their labelmate, Mark Spoelstra, whose own reading can be found on his 5 & 20 Questions (1965).

In 2004 Collectors' Choice Music issued Kathy & Carol (1965) on CD for the first time, restoring this unquestionable landmark for generations of folk enthusiasts to come. ~ Lindsay Planer