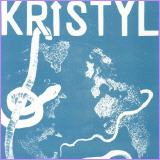 Recorded at Allen-Martin Productions Louisville, Kentucky. This is a psych christian rock group Kristyl who released this LP in private pressings of only 200 in 1975. The music is reminiscent of Wishbone Ash from the Argus album. This album is homemade guitar psychedelia from Kentucky. A nice mixture of gentle dreamy passages, heavier acid guitar and wah-wah fuzz along with charmingly teenage vocals.

Highly regarded local Christian 1970s melodic guitar-rock with an open late-1960s westcoast vibe, dual guitars and great organic playing/vocals all around. They have a very distinct sound which makes the tracks seem similar at first, but it opens up after some plays and remains that way. The best tracks such as "Deceptions of the mind" and "Valley of life" are truly monumental. Personal fave, one of the big ones in the style. Great sleeve design - note the drummers t-shirt. Originals were pressed on very thin vinyl, so most copies have slight bowl warps.

Timeless pinnacle of teenage, rural, Christian psychedelia. The consensus seems to be that this is a 1975 recording, but dealers always (accurately) describe it as sounding much earlier. The psychedelic playing on ‘Deceptions of the Mind’ often contrasts with the anti-drugs/sex lyrics: “Alcohol and sex unclean, copping drugs all over the scene/What is it that we need, Lord it’s love and it’s for free”. Kentucky can’t have been an easy place to strike a deal to have this recorded, so maybe they felt they needed to put an anti-drugs message in here and there. The music is consistently wonderful, side 1 in particular, with side 2 ending with the beautiful ‘Morning Glory’. The dual guitars are laden with effects and full of interesting twists and turns. The singing is honest and clear. Not as crazed as Fraction, but in the same league of expressive, sincere musicianship. A beautiful, naïve feeling pervades the whole LP, like they believed anything could happen, the world could change as a result of their sounds. For me, they were right. Why is the drummer wearing a shirt with a hash leaf on it, perhaps it says “hash free zone” underneath? The sleeve art is also top-ten, being a monochrome crudely drawn snake encircling the earth.