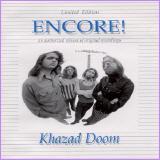 Encore! is the official reissue of Khazad Doom's original recordings. Khazad Doom made a name for themselves in Morton Grove, Illinois, during the early 70's with their unique style of progressive rock music, metaphorical lyrics, and stage presence. Their music was driven by pumping bass lines, dynamic Hammond swells, and multi-dimensional guitar work. On top of that, three of the four musicians contributed to beautiful 3-part vocal harmonies, and counterpoint.

After Jack Eadon found out about the release of boot-legged versions of Level 6 1/2, he decided to release a remastered version of most of the band's recording(many recordings didn't survive storage) on CD. The first section of Encore! begins with two songs from an early version of Khazad Doom called The Laymen. These two songs are simplistic compared to what would be recorded by the band just a couple of years later. But their inclusion here is only meant to show the origins of Khazad Doom.

The second section of the CD shows a maturing band, with strong material from their first album Level 6 1/2. The album's highlight is a 23-minute trilogy called "The Hunters". Most of the music has a noticeable psychedelic-influence while also displaying early characteristics of a style of music later called "progressive rock"(developing themes, multiple parts, and a concept). Organist Steve "Al" Yates shines here with some tasty organ chops. "Narcissus" is the next song after the trilogy, and it's filled with some very beautiful 3-part vocal harmonies, and counterpoint. "In This World", considered to be Steve Yate's best composition ever, features violins which adds a symphonic, and serene, quality to the music. "Nothing But Fear" is a masterpiece of early progressive rock. The song has a symphonic, carnival, atmosphere to it with dramatic build-ups of piano, multiple guitars, and marching snare drum patterns. Level 6 1/2 is considered a classic , and the music more than proves that point.

A year later, Khazad Doom recorded their self-titled album. Unfortunately, this album was never released until now. If it was, the band could have received even more recognition as a maturing progressive rock band. The highlight here is the 12-minute piece entitled "Stanley's Visit To Kerkle Morff", which is also the longest piece on the album. Beatles-influenced vocals and melodies charm the listener, as the epic weaves in and out of its various sections, and "Stanley" travels to a surreal world. The band took 6-months to record the epic by ping-ponging between two reel-to-reels more than 20 times! There is alot going on here, and will offer the listener many surprises over time. 4 shorter songs, similar in style to "Level 6 1/2" era go on to finish-off the self-titled album.

Overall, "Encore!" is a very satisfying package that will satisfy fans of early 70's progressive rock.

Throughout the sixties and early seventies, a rock ‘n’ roll band from suburban Morton Grove, Illinois performed in and around Chicago. Even though they remained together about the same time as the Beatles dominated American pop charts, Khazad Doom (pronounced Kah’ zud doom) never made it in the traditional sense. But artistically, over nine years, they forged a kind of music now called Progressive Rock.

After their split in 1972, during the eighties, the band achieved cult status when their promo album LEVEL 6 1/2 was reissued and distributed throughout Europe. Just one copy of the original LEVEL 6 1/2 vinyl rides the top of collectors’ wish-lists and has traded for as much as $1,500 a copy!

In 1995, the limited edition retrospective CD called ENCORE! was burnt from Khazad Doom’s original tapes. It includes much of the band’s decade of output. As one reviewer said:

“This collection lovingly and reverently captures the spirit of their contemplative creations."
While the ENCORE! CD is now sold out, Jack Eadon's powerful sixties memoir, Got To Make It!