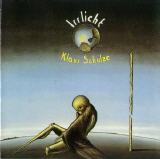 The title of KLAUS SCHULZE’s 1972 debut album translates, perversely, as "Will o’ the Wisp", an ironic tag for some of the purest, most powerful noise ever recorded.

SCHULZE was of course a founding member of both TANGERINE DREAM and ASH RA TEMPLE, a Krautrock drummer in those days but with higher aspirations. So he traded his drum kit for a small roomful of primitive synthesizers, and proceeded to wage war on the more polite strain of meditative electronic music then coming into vogue.

Keep in mind this was during the age (at least in Germany) of the big cosmic drone: think of TD’s "Zeit", recorded in the same year but sounding nowhere near as sophisticated as their ex-drummer’s first solo effort. The album is subtitled "Quadraphonic Symphony for Orchestra and E-Machines", but SCHULZE was no RICK WAKEMAN (thank God), and his orchestra couldn’t hope to compete against the sustained hum of his generators during the awe-inspiring 29-minute opening track. It goes way beyond the limits of a simple drone: this is ambient music for titans.

Imagine yourself attending a formal concert hall symphony. The woodwinds and strings are quietly tuning; the conductor is approaching the podium…when out of the ether some sort of otherworldly buzz gradually begins to overwhelm the auditorium, fading in and out, while the hapless musicians try in vain to play through it. That’s the experience of "Ebene, Gewitter (Energyrise-Energycollaps)", before the track surrenders to a mind-bending, monster movie organ, played loud enough to scare away even the toughest headbanger, and about as far removed from New Age navel-gazing as synthetic music can get without threatening your sanity.

The remainder of the album (another 21+ minutes, very generous in its original vinyl format, but it needs to be heard on CD) is no less frightening, but on a much quieter level. "Exil Sils Maria" is music for contemplating the void, the soundtrack to an endless alien abyss recalling the cyclopean vistas of an H.P. Lovecraft cosmology.

This album throw the listener straight into another world. I won't describe the full instrumentation, but its essentially based on a quadriphony using organ, VCS-3 & Moog III synths. No drums, although Klaus Schulze is a drummer... But it's not a lack. It's quite an arythmic music, very minimalist, but with an attentive ear, it's a real discovery, a trip in another world, maybe the travel of your mind once you're dead... It seems to me that the organ represents the track whose listener shouldn't deviate. everything else is the unknown life around that path. And this all along the album. The first part walks us through a desolate landscape, with strange noises around, that could be somthing like spirits. That part suits well with the sleeve picture. The second part, the shorter one, brings us into an underground world, let us walk, or fly, through different gate, which close noisily behind us, with spirits around, who are the guides or the guards, and who protect us from the hostile creatures of which we hear the heavy breathing near. The last part happens in a vast area, less dangerous, where we travel, almost in peace, during twenty minutes.

The complete album releases a heavy, glaucous, misty atmosphere. It's obviously not a funny work, and you can't listen to it at any time. it's an introspection music to be carefully listened to. It's forme the best album of Klaus Schulze.