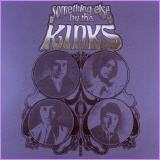 Face to Face was a remarkable record, but its follow-up, Something Else, expands its accomplishments, offering 13 classic British pop songs. As Ray Davies' songwriting becomes more refined, he becomes more nostalgic and sentimental, retreating from the psychedelic and mod posturings that had dominated the rock world. Indeed, Something Else sounds like nothing else from 1967. The Kinks never rock very hard on the album, preferring acoustic ballads, music hall numbers, and tempered R&B to full-out guitar attacks. Part of the album's power lies in its calm music, since it provides an elegant support for Davies' character portraits and vignettes. From the martial stomp of "David Watts" to the lovely, shimmering "Waterloo Sunset," there's not a weak song on the record, and several — such as the allegorical "Two Sisters," the Noel Coward-esque "End of the Season," the rolling "Lazy Old Sun," and the wry "Situation Vacant" — are stunners. And just as impressive is the emergence of Dave Davies as a songwriter. His Dylanesque "Death of a Clown" and bluesy rocker "Love Me Til the Sun Shines" hold their own against Ray's masterpieces and help make Something Else the endlessly fascinating album that it is. [Castle's 1998 CD reissue of Something Else contained eight bonus tracks: several A- and B-sides from non-LP singles, from both the Kinks and Dave Davies as a solo act — "Act Nice and Gentle," "Autumn Almanac," "Susannah's Still Alive," "Wonderboy," "Polly," "Lincoln County," "There's No Life Without Love" — plus an alternate take of "Lazy Old Sun."]