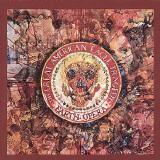 Both Rowan and Grisman were virtuoso folk and bluegrass performers in Boston clubs, who became caught up in the changes in the music scene in the mid 1960s. They formed Earth Opera in 1967, and were joined by John Nagy on bass, Paul Dillon on drums, and Bill Stevenson on keyboards and vibraphone.

The group was signed by Jac Holzman to Elektra Records. Their self-titled debut album, produced by Grisman's ex-bandmate Peter Siegel, and including veteran drummer (and Mothers of Invention alumnus) Billy Mundi, was a mixture of folk and psychedelic influences. Although it never charted, Elektra was willing to record a second LP, "The Great American Eagle Tragedy". By this time, Stevenson had left but the album featured an array of eminent guests including John Cale (viola) and Bill Keith (pedal steel).

"The Great American Eagle Tragedy" managed to reach the lower end of the national charts, the cover featuring a parody of the US presidential seal with a superimposed death skull and what looks like blood stains. However, the band' relative lack of success caused Earth Opera to break up in 1969. Rowan, Grisman and Nagy all continued their careers in the music business.