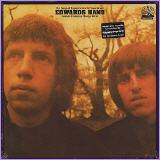 Formerly known as Picadilly Line, Edwards Hand is a musical group formed by Englishmen Rod Edwards (keyboard and vocals) and Roger Hand (acoustic guitar and vocals). After a 1968 album released under their former name, in 1969 Edwards Hand released an eponymous album produced by George Martin who, taking a break from working on The Beatles' White Album, described their music as 'exceptional'. The online CD vendors Freak Emporium (UK) and Forced Exposure (US) tentatively compare it to certain works by Kaleidoscope and Fairfield Parlour.

"Rod Edwards and Roger Hand formed this breezy, psychedelic pop outfit after briefly recording as The Picadilly Line. Sadly, this album never made it to a British release as their record label folded, which subsequently took their EMI deal and UK distributor contract away at precisely the wrong time. This is therefore a genuine lost UK '60s gem that received glowing reviews upon its release in the U.S. It makes its debut here on CD. Recorded on four track tape at EMI St. Johns Wood in late '68, with Geoff Emerick and George Martin during a break in the sporadic White Album sessions, you can hear the benefits from Martin and Emerick's vast experience, technical skills and orchestral arrangements. There is plenty of swinging London vibes and whimsical vocals here, as well as dreamy vocal harmonies and elaborate electric and acoustic arrangements very much of the era. The Beatles connection is obviously strong, and much of this material is reminiscent of late '60, early '70s Paul McCartney as well as Donovan -- with its chirpy, evocative lyrics, harmonies and warm arrangements -- but there is also a late Small Faces/Kinks vibe in their lyrical descriptions of old London Town. Other late '60s comparisons would certainly include Kaleidoscope (UK) and the early orchestrated material by The Strawbs. This exact limited edition reissue is housed in a reproduction of the original sleeve (featuring a sleeve note from George Martin) and packaged in a jewel case. Re-released with full consent of the producer and band." (forcedexposure)

Originally formed in 1967 as Picadilly Line by Rod Edwards and Roger Hand, English psychedelic pop group Edwards Hand released three albums before disbanding in the mid-'70s (1968's The Huge World of Emily Small [as Picadilly Line] featured the talents of Danny Thompson, Alan Hawkshaw, Jan Barber, Herbie Flowers, and Harold McNair). The group's highly collectible eponymous debut was produced by George Martin, who worked with very few pop acts outside of the Beatles. The record received its share of critical acclaim, earning comparisons to the Bee Gees, as well as the aforementioned Fab Four. Stranded (1970) and Rainshine (1973) were also produced by Martin.

Because Edwards Hand were one of the few pop-rock acts other than the Beatles who were produced by George Martin in the late 1960s, their obscure self-titled debut album has generated some rough comparisons to the Beatles' own work. It's true that the harmonies, melodies, and orchestrations bear some similarity to those heard on the very most pop-oriented of the Beatles' productions, though in truth there's a stronger resemblance to the ornate pop-psychedelia of the late-1960s Bee Gees. Throwing those names into the hat so quickly, though, is a little misleading and might spark hopes for a buried treasure that's better than it is. For the actual songs are certainly coyer and more saccharine than the compositions of the Beatles, and even make the Bee Gees' late-'60s stuff sound melancholy and a little hard-edged. It's more something of a combination of Beatles/Bee Gees-lite with poppier, soaring, sometimes fruity orchestral arrangements -- most likely Martin's strongest contribution to the record -- and more of a middle-of-the-road/sunshine pop/toytown psychedelic influence than the Bee Gees (and certainly the Beatles) admitted. Certainly some of the lyrics make one blanch a bit on the printed page, with their fey references to picture books, kings and queens, bringing flowers in the morning, walking down London's Charing Cross Road, magic cars, and the like. If you like those elements, of course, there are things to enjoy about this record. It has reasonably catchy though not stunning melodies, good duo vocal harmonies, and an ambience that captures something of the most innocuous side of the Swinging London/flower power era. It does sound best, however, when it gets most serious and Bee Gees-like, "If I Thought You'd Ever Change Your Mind" and "Orange Peel" being two examples. (AMG).