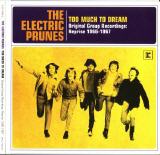 The Electric Prunes - Too Much To Dream - Original

" The story of The Electric Prunes, to misappropriate a footballing expression, is one of two halves. The first half is the story of a band of hopeful Seattle musicians who relocated to LA where, under the aegis of their engineer cum svengali Dave Hassinger, they created 'I Had Too Much To Dream Last Night' one of the most enduring psychedelic anthems of all time as well as two albums of (mostly) high quality lysergic pop. The song's selection by Lenny Kaye to open the seminal Nuggets compilation - thus introducing countless new generations of garageniks to the delights of well used fuzz guitar and trippy lyrics – only served to further cement their place in legend. In the second half of the story, the svengali turned on his charges and, having secured the rights to The Electric Prunes name, teamed up with mighty producer David Axelrod to deliver a pair of religiously themed concept albums only using the original group members sparingly and eventually doing away with them all together. Although you could file this expropriation with all the other woeful tales of exploitation that blighted so much of the '60s musical landscape it did have the merit of generating the Mass in F Minor album, possibly the first attempt at fusing the principles of rock with those of the liturgical cannon.
This twin CD set focuses solely on the first half of the story by bringing together their eponymously titled debut album, its follow up Underground and various singles (as well as the brilliant Vox Wah Wah pedal ad complete with the uber' 60s "It's the now sound, it's what's happening!" tag line) all recorded by the original line-up for Reprise. As ever, the good people at Rhino have done a sterling job in putting together a complete package. So alongside the music itself you get some nice liner notes, a fascinating interview with original members James Lowe and Mark Tullin and reproductions of the original album cover art.
In many ways this reissue shows that the Prunes were more than a one trick pony and definitely puts to rest the general assumption that they were a set of musical automatons commanded by a diabolical puppeteer. Despite a few misjudged musical choices in an attempt to soften the band's rougher edges and increase their appeal, this body of work is a master class in mid-sixties Stateside garage psychedelia which, in its earnest attempts to replicate British sounds actually created something quintessentially American. Regardless of their relevance as a historical artifact, these sides will also provide you with plenty of fuzz guitar riffs, the occasional (Vox Wah Wah pedal enabled) sitar break, tight vocal harmonies, and a driving back beat. And you definitely can't have too much of that." ~ Arthur Cravan (Shindig)