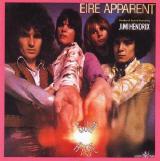 Eire Apparent was a band from Northern Ireland.

In early 1967 guitarist Henry McCullough (formerly of The Sky Rockets Showband and Gene & The Gents) from Portstewart in Northern Ireland made his way to Belfast where he teamed up with bassist Chris Stewart (born Eric Christopher Stuart), singer Ernie Graham (born Ernest Harold Graham, 14 June 1946, in Belfast) and drummer Davy Lutton (born William David Lutton) to form the psychedelic outfit The People. Later that year the band moved to London and were signed by ex-Animal Chas Chandler for Track Records who changed the band's name to "Eire Apparent".

Despite only having released one single, Chandler sent them on tour with headliners Jimi Hendrix Experience, Soft Machine and The Animals. Things went quite well during 1968 until, when in Canada, McCullough was sent back to Ireland due to visa problems, so Mick Cox took his place in the band.

The new Eire Apparent cut the album Sunrise in 1969 with Jimi Hendrix producing, who had already produced for Cat Mother & the All Night Newsboys before with their album The Street Giveth and the Street Taketh Away released in 1969. Jimi had tried to combine traces of Rock, Pop and Psychedelia. Several sources claim the existence of a second Eire Apparent album (reportedly produced by Soft Machine drummer Robert Wyatt) but it never saw the light of day. In May 1970, hardly noticed by the public, the band broke up. (Wikipedia)

Eire Apparent were a band that deserved more success than they enjoyed in their brief three-year existence, and more recognition than they've received in the decades since. Mostly they're remembered for having had one album produced by Jimi Hendrix. The band had its roots in the Irish show band scene of the mid-'60s -- guitarist Henry McCullough had put his time in, playing with outfits such as the Sky Rockets and Gene & the Gents, based on Portstewart, Northern Ireland. By 1967, McCullough had decided to take his talent and career elsewhere and headed to Belfast and then to England, to Blackpool, where he crossed paths with Chris Stewart (bass), Ernie Graham (guitar/vocals), and Dave Lutton (drums). The latter were all ex-members of a show band called Tony & the Telstars, and with McCullough decided to form a psychedelic band that they christened the People. They made their way to London, where they struggled just to earn a decent living -- but a fortuitous gig at the UFO Club brought them to the attention of Mike Jeffery and Chas Chandler, the two managers of Jimi Hendrix. They got the band -- renamed Eire Apparent at Jeffery's insistence -- signed to Track Records, the imprint belonging to Kit Lambert and Chris Stamp (for which Hendrix also recorded), who were also the managers of the Who.

For musicians who had been living in dire poverty when they arrived in London, the whirlwind of VIP representation they'd stepped into and the opportunities suddenly presenting themselves were astonishing. And it only got better when Eire Apparent were booked onto Hendrix's next tour of the British isles, working alongside acts such as the Move and such up-and-coming bands as Pink Floyd and the Nice. The finish to 1967 was capped by the recording of their first single, "Follow Me" b/w "Here I Go Again," which was issued in January of 1968. The record never charted, however, and marked their last release on Track. Next it was off to America, supporting Hendrix, Eric Burdon & the Animals, and Soft Machine (both acts managed by Jeffery). They spent a large part of 1968 playing shows in the United States, and had one show scheduled in Canada. At that point, the group's fortunes suffered a setback when McCullough was arrested, in part due to problems with his visa, and deported to Ireland. It marked his exit from the band, as he was summarily replaced by Mick Cox, who completed the tour with the group and became a permanent member.

The following month, the reconfigured Eire Apparent resumed their run at stardom with an album. What made the record special, beyond what the four members brought to the table, was the presence of Jimi Hendrix as producer. Hendrix had previously served in a similar capacity on behalf of Cat Mother & the All Night Newsboys, but Eire Apparent attracted somewhat more attention, owing to the fact that their album received an American release through the Buddah label, which also issued their second single, "Rock 'n' Roll Band" b/w "Yes I Need Someone." Hendrix also played on both sides of the single, as well as on the Chris Stewart-authored album track "The Clown," but his involvement with their music was more complex than even these moments of direct participation. The guitarist apparently saw Eire Apparent as a vehicle for more pop-oriented sounds than he usually got to explore on his own recordings, freely mixing softer sounds with a strong psychedelic influence amid the harder sound that was the group's forte. The harder sounds of songs such as "Morning Glory" were juxtaposed with more lyrical moments, vocally and instrumentally, without ever losing sight of their basic heavy electric sound.

The results -- to which Robert Wyatt and Noel Redding also apparently contributed -- were off-putting to some who expected something different from a project related to Jimi Hendrix, and also may have arrived a little late for the psychedelic influences. The album, entitled Sunrise, was issued on the Buddah label in the United States, and thanks to Hendrix's name on it and the time they put in touring, it did sell better than some Buddah releases of the era that didn't have a hit single to drive sales or get AM radio play. Copies of the record turned up in collections and used bins from time to time from the 1970s through the 1990s (and, indeed, still sometimes show up), which is more than can be said for some Buddah LPs of the era. But sales were nowhere near what was needed to break the group properly in the U.S. (and thanks to the U.S.-only release, Sunrise became a true rarity in England). Additionally, Eire Apparent had run into serious trouble on two fronts. Their extended time touring America had left them without an audience in England, and the gigs there dried up when the bandmembers were left to their own devices (and not touring with Hendrix). Additionally, they parted company with Jeffery after a tour of Europe opening for Hendrix. Without him, Burdon, or Soft Machine to headline, however, and without a hit record, their prospects in America were now dimmed considerably. Cox left the band in early 1969 and was succeeded by Tiger Taylor, who filled the lead guitar spot for their final year together. The band finally broke up at the start of 1970 and was almost instantly forgotten.

In later years, Eire Apparent were mostly remembered as a footnote to Hendrix's career, though the members remained active throughout the ensuing decade and beyond. Ernie Graham helped to found the pub rock band Clancy, after cutting a genuinely brilliant solo album -- indeed, one of the great albums (and perhaps the greatest unknown album) of the 1970s, backed by Brinsley Schwarz. Mick Cox organized a band of his own and worked with Van Morrison, among others, while Dave Lutton passed through the lineup of Heavy Jelly, before crossing paths professionally with Marc Bolan and Chris Spedding. Chris Stewart went on to become a top session man, while Henry McCullough, following his sudden exit from the band, jumped to Spooky Tooth and then the Grease Band. He backed Joe Cocker on the With a Little Help From My Friends album, and did a lot of session work (including Donovan's Essence to Essence). He was also a member of Paul McCartney's Wings in one of its early configurations, on the Red Rose Speedway album. (Bruce Eder, All Music Guide)


Eire Apparent was a band from Northern Ireland and formed in 1967 with founding members Ernie Harold Graham (vocals), Eric Christopher Stewart (bass), William David Lutton (drums) and Henry McCullough on guitar. As 1968 rolled along, original guitarist McCullough was replaced by Michael Charles Cox and this is the line-up that recorded the album "Sunrise" in October of the same year at Hollywood's TTG Studios with Jimi Hendrix producing who also ended up contributing lead guitar to nine out of the eleven songs included!

While Hendrix's music leaned towards more blues/R&B based psychedelic sounds, this group's preferred style was also psychedelic but much more pop sounding. If you liked Noel Redding's compositions with the Experience "She's So Fine" and "Little Miss Strange", then you'll love this album. Those two songs are a good example of the style featured throughout the LP, for example, the up-tempo "Someone Is Sure To (Want You)" which is very pop sounding but with Hendrix's noticeable lead guitar on top. The opening number "Yes I Need Someone" is actually my least favorite tune with a good chorus and some strange lead guitar phrasings from Hendrix but it is eclipsed by the superior material that follows! The longest composition is the more prog-rock sounding "Mr. Guy Fawkes", clocking at about 5:50. It uses haunting chord progressions for its verse and chorus plus an inventive string/horn arrangement. In the middle, after what sounds like an explosion Hendrix comes in to play a cool harmonized lead guitar pattern. This is definitely one of the album's strongest cuts! In a similar vein is the other five-minute composition "Captive In The Sun" that also includes an interesting string accompaniment with the piano being the main instrument. In the middle there's another cool solo from Hendrix using the wah wah pedal. However not all songs are psychedelic as evidenced by "Rock 'N Roll Band" where Hendrix delivers some mean bluesy licks throughout! Track number three "The Clown" is interesting too featuring some background vocals from Experince bassist Noel Redding in the chorus but the best is saved for last: right before its conclusion Hendrix attempts to mimic the sound of laughter with the guitar! It came out pretty well! Another favorite of mine is the haunting, up-tempo "Morning Glory" with more minor-based chords plus the usual soloing from Hendrix on top. The chorus melody in "Magic Carpet" has a slight oldies feel to it; a song made better by Hendrix's wah wah overdubs! "Let Me Stay" is another pop-sounding tune but here, Hendrix's lead guitar is more prominent with multiple overdubs.
The two remaining songs do not feature Hendrix's playing: "Got To Get Away" (Cox plays lead guitar) and the LP's closing all acoustic "1026" that also includes some word-less chanting. Very nice exit!

If you like psychedelic pop from the 60's then this is for you. Also, fans of Hendrix should definitely check this out too. This is a good chance to hear him play lead guitar over some much more pop sounding material than his own! (Amazon)