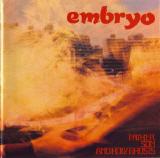 Third album by German legends Embryo, originally released in 1972. A cool set of trippy jazzy rock with plenty of keyboard led jams. This is one of the bands more commercial releases yet it does not sacrifice the experimentation that made the band so admired. Great Krautrock by one of the top 10 German bands of the 70's.

"Embryo is most definitely one of the more obscure bands (as if there aren't a lot of obscure bands with progressive tendencies, haha) but they are one of the few bands that can say they were favored by the great Miles Davis, who is known for his high musical standards. Now, I am not exactly sure which albums of theirs this praise applied to but this album is definitely a wonderful example of jazz-fusion recorded during the early years of the genre, which I believe he would have at least found amusing. In particular it is the eastern influence in the band that is most striking. On "Father, Son, and Holy Ghosts," the band members run a gambit of instruments including veena and tarang sitars, flute, violin, marimba, vibraphone and numerous other precussion instruments. Using a few different time signatures and, in a lot of cases, jazzy rhythms, they weave some very fun "jams" ontop a foundation of space rock. Crossing a line between Pink Floyd's crescendoing, Gong's jazzy wit and time signatures, and krautrock bass-lines and afrocentric rhythms, supplied by supposed viruoso bass-player Dave King and the groups leader and drummer/precussionist, as well as ex-Amon Duul member, Christian Burchard. The most noticable player on the album is the incredible Sigi Schwab on guitar and sitars and the best part of his playing is that he does not over-power the music at any point with his soloing or pedal effects, always adding and never taking away. As for the tracks themselves, "The Sun Song" and "The Forgotten Sea" stand out as the most compelling and original tracks on the album. "The Sun Song" is, according to them, a trip to the sun; this is interesting as this track is the most eastern-influenced of them all with its pounding sitar, sometimes disspondent but always interesting eastern flute work, and great precussion anchored by the marimba. All the instruments featured play incredibly well off of each other and do indeed provoke an esoteric sense of travelling towards the sun much like the idea behind a lot Pink Floyd songs such as "Meddle," Set The Controls For The Heart Of The Sun," etc. "The Forgotten Sea" is a jazz jam featuring marimba and guitar as the featured soloists. I don't find this song overly challenging beyond the soloing, but very fun and probably the song on the album besides the latter mentioned that I could see appealing most to Miles Davis. On the otherhand, who knows. All the other songs are great as well. King Insano runs like a a song that could have influenced the David Cross/John Wetton incarnation of King Crimson with its brooding violin play via Edgar Hoffman. Marimbaroos is a bit along the same lines only instead of brooding, much more peaceful and moving. But regardless, this album is most definitely one of my favorites and is recommended to any parties interested in the above bands or jazz-rock fusion." ~ Progarchives