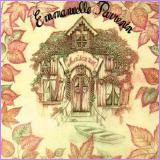 We begin by saying that this is an album unlike any other. A bold statement, perhaps. Yet look in the "Scented Gardens of the Mind" book and you will see this description: "a revelation of a folk album, with songs of incredible beauty and innovative arrangements. It features traditional instruments you've hardly ever heard before and touches of the avant-garde. Play this album directly after that of another randomly chosen female folk album, and you will notice the difference! This is one of the best!" Parrenin had been part of a traditional "antique folk" movement in France in the late 1960's (she was in many ways a French equivalent to Sandy Denny or Mandy Morton); indeed, she had recorded eight albums with musicians from this scene before "Maison Rose"-her best, and last album, recorded in 1976 and released the following year. The record seems to alternate between a cosmic take on an ancient Breton sound, and delicate, multi-tracked ballads-ranging from sounds that would not be out of place on an Ash Ra Tempel album to elements of traditional French folk music (including home-made instruments) that are just as exotic. Certainly, the avant-garde edge lurking beneath the simple folkiness of "Maison Rose" puts in mind the explorations of Brigitte Fontaine with her sometime musical voyager Areski; there are also suggestions of the pastoral caranavserai aesthetic of Vashti Bunyan, as well as the multi-track sensuality of Linda Perhacs (to name two much-touted singers who seem to have a similar ability to enchant). But Parrenin has her own style, her music has its own deeply ethereal quality, and the album itself has its own magic spell to cast that renders comparison with other albums unimportant in the end. Magnificent. we say. Now, on to the presentation-the highest quality mastering and pressing (done at Acoustech Mastering/RTI in California, the same people who master and press every title that audiophile label Classic Records makes); the resulting LP is housed in a poly-lined sleeve, inside an ultra-heavy 1960's style gatefold jacket, which is housed in a loose-fitting plastic sleeve. Inside the sleeve, you will find an insert with full details on Ms. Parrenin, printed on 100% recycled paper. The LP labels are replicas of the Ballon Noir originals. A top of the line pressing all the way. Limited edition of 500 copies. (amazon.com)