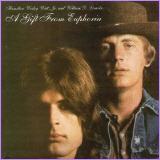 Originally from California, where they had earlier recorded with Word, they travelled to Houston around 1967 and settled there recording their superb 45 (the flip in particular is an unnerving haunting number). Both tracks later appeared on the compilation A Pot Of Flowers (LP). During their stay in Houston they also recorded four unreleased songs:- Pick It Up, In Time, Walking The Dog and Oh Dear, You Look Like A Dog. These are as psychedelic and good as their recorded output.

Apparently this demo impressed executives at Capitol Records, who subsequently invested a fortune recording an album in Hollywood, Nashville and London. Produced by the band and Nick Venet, A Gift From Euphoria is a magnificent record. The precise direction of the band is difficult to categorise, but country-rock merging with LSD will give you some idea. It has a creepy thread running through it, a foreboding darkness that is embodied most explicitly in the final track World:

"World, you've let me down again
I'll tell them just how bad you've been
I'll run away 'cause you don't care
And find another world somewhere
Now as I leave, I'd like to say
World, I hope we meet again someday"

Watt's guitar is noteworthy throughout the record and he explores different tones from song to song, from gentle acoustic (Sunshine Woman) to massive walls of distortion (Did You Get The Letter, Suicide On The Hillside, Sunday Morning After Tea). Sadly, Capitol seemed to be at a loss as to how to market the finished album, and it barely made it past the promo stage. Indeed, it's nearly impossible to locate without the large round hole in the corner of the cover that Capitol used to designate promotional copies during the period.

Watt played guitar on a number of albums as a hired gun, most notably Lee Michaels' Carnival Of Life, where he is front and center in the mix, blasting away. Most collectors agree this is Michaels' best album, and Watt's fiery guitar is the primary reason. He also wrote some material for the L.A. based East Side Kids and he and Lincoln wrote for, co-produced and played on Bernie Schwartz' solo album circa 1969/70.

A self-titled Finnish album by Finjarn and Jensen (Columbia 7E 062-37059) from 1970 includes two Euphoria songs, Lady Bedford and Did You Get The Letter retitled as Windsor Bedford and Sorry Girl, But Now I Know Things Will Be Much Better Now You've Gone (the latter being part of Did You Get The Letter's lyric). The songwriting credits too have been changed to Finjarn and Jensen!
Doug Delain who played on the early Euphoria recordings, was involved with Love and The Doors.