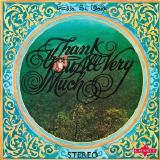 From Internationalartistsrecords.com: “Endle St. Cloud formed in Texas in 1968 and took their name from the band’s leader. He was joined by several ex-members of already notorious bands. Peter Black (late of IA's own Lost And Found) was the guitarist, David Potter, the drummer, had been in L. A. band The East Side Kids and bass player Alan (sometimes listed as Andrew) Melinger had been with The Iguanas. Mr. St. Cloud himself was on vocals and piano.

International Artists was a likely or even obvious home for the new band originally called "Endle St. Cloud In The Rain", given their geography and Peter Black's involvement with Lost And Found. ‘Thank You All Very Much’ was the group’s only album, released by International Artists in early 1970, the label’s last ever album release.
The band’s sound ranges from good time blues to country rock with a leaning towards the heavy, not unlike that of their West Coast contemporaries Moby Grape. A unique feature of the album is the short spoken introductions to each of its songs over a piano backing, each played in a different style.