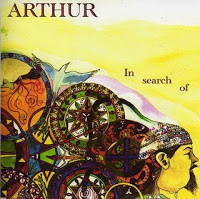 ‘Long awaited release of this psychedelic/acid folk masterpiece from the North. Arthur started his career in Toronto, Canada as folkie in the mid ’60s. In 1969 he went to Colorado and recorded a 1-sided demo LP that surfaced some years ago in collector’s circles. It was on Two:Dot, the same label that Hendrickson Roadhouse was on. Only a handful of demo copies were released and sent out to major labels to get a record deal. This happened only later after he signed with Tumbleweed Records and released two albums as Arthur Gee. This first ever official release includes his complete demo LP, unreleased sessions and his mega rare 45 rpm both from before the LP and recorded in Canada. The music can be described as a mixture of Perry Leopold, William C. Beeley and early Pink Floyd (his 45 rpm) which is pure magic. Pressed on heavy audiophile vinyl, ultra heavy old style cardboard sleeve and an insert with a bio witten by Arthur.’

‘Dark, damaged acoustic strum folk in Perry Leopold style but a bit stronger vocally. Missed notes, stream of consciousness lyricism, and obsessions with mystic and biblical imagery. Saddened reports on the lost state of the planet. A great loner mini-LP, although you really can feel too much.’
~Acid Archives/RM

‘The last track is a killer deep guilt-trip on level with Perry Leopold.’
~Acid Archives/PL

Tracks on this LP are as follows: