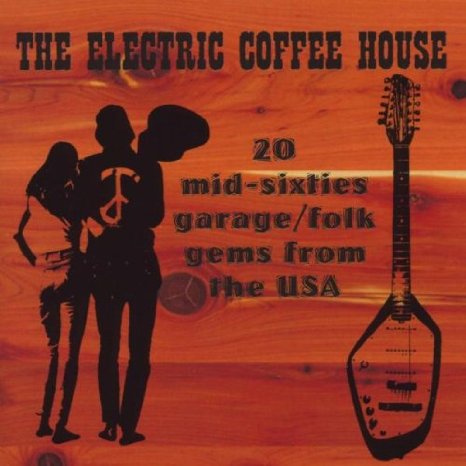 The Electric Coffee House is a collection of mid-’60s garage/folk gems from the USA. This compilation concentrates on that Byrds-inspired period when folk plugged into amplifiers and came up with a sound built on 12-stringed guitars and harmonies, but with a generous helping of rock and roll added to the mix. The album comprises 20 tracks, previously uncomped on CD from such disparate artists as Elvis Presley’s favorite garage band, a blind singer discovered by Davy Jones of The Monkees, a Mexican band who had to learn their lyrics phonetically, and the young Terry Jacks (of “Seasons in the Sun” notoriety), plus a host of other harmonizing hopefuls. Prepare to be well and truly jangled. Compiled by legendary psych musician and Psychic Circle label-head, Nick Saloman (The Bevis Frond). Artists include: The Tiffany System, The Energy Package, Tommy Jay, Finders Keepers, Rick Jarrard, The Clefs Of Lavender Hill, The Guilloteens, The Sound Of The Seventh Son, Jeremiah, The Iguanas, Vinnie Basile, The Yankee Dollar, Starbuck, The High-Five, The Chessmen, Peck’s Bad Boys, The Stream of Consciousness, Keith Murphy And The Daze, The Scandal and The Gants.

“Up until the Beatles struck, America led the way in pop music. Suddenly the tables had turned and ‘The British Invasion bands’ took control. American kids invigorated by this no-nonsense, self-written approach, formed bands in every town. This is what gave rise to the garage band phenomenon. Snotty youths modelling themselves on The Stones, The Beatles, The Kinks et al produced the primitive anthems now so beloved by collectors across the globe. Yet, there was another thread that came from a distinctly different angle. This was the ‘folk rock’ movement, heralded by The Byrds and The Beau Brummels. Basically it was born from the collision of the American coffee house scene withjiritish pop. The Byrds had been the first to successfully combine traditional folk with the (angle of The Searchers twelve string sound, and before long there was a plethora of similarly minded musos swapping their acoustics for Rickenbackers and growing Brian Jones hairdos. This compilation comprises 20 tracks by bands who were taking this path into the mid sixties haze. Some of it is pop, some of it is bluesy, some of it is primitive, but all of it has that underlying folk feel. Before long Dylan would plug into the mains and Jefferson Airplane would transform their folk roots into fully-fledged psychedelia.But for now, we hope you’ll enjoy this journey through an intriguing and often overlooked field of ’60s music. I guess if it needs a label it’s ‘garage folk’, but let’s forget about compartmentalisation, and just tune in to a time when it all seemed new and exciting down at ‘The Electric Coffee House’.” (by Nick Saloman)