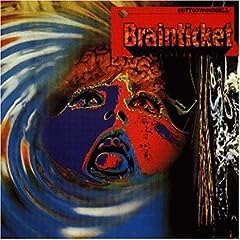 Cottonwoodhill is one of the trippiest records ever made, capturing the intensity of the peak LSD experience far more successfully than any Timothy Leary recording, and even today, when many such documents from that era can sound silly and dated, Brainticket’s fascinating debut still holds hallucinogenic potency. The record has only two proper songs, “Black Sand” and “Places of Light,” with a side and a half of the album taken up by the three-part “Brainticket.” “Black Sand” opens the disc with a driving funk beat and powerful organ and guitar interplay, adding in vocals distorted beyond coherency. “Places of Light” begins in a slightly lighter vein as a flute leads the proceedings, a looser jazzier piece that throws in some of Dawn Muir’s odd spoken word vocals. Before one realizes what has happened, the piece has faded out and there is suddenly a crashing sound, car horns, and engines starting up. “Brainticket” is a bizarre roller coaster ride through weird sound effects and electronics, an endless organ riff, and Muir’s acid-rush ramblings from hushed whisper to urgent screams, as any coherency she had earlier becomes lost to mind-expanding visions. Rather than the laid-back mellow groove of some psychedelic music from this era, Cottonwoodhill has a hyper energy in the frenetic organ riff and Muir’s voice, like an acid trip out of control, while at times the various sound effects take over completely.
AMG