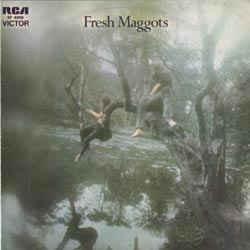 Long lost UK folk rock album from 1971. Fresh Maggots were just two people, Mick Burgoyne and Leigh Dolphin, (they came from Nuneaton, Warwickshire, England) and they played melodic acid folk-rock with electric (heavy on the fuzz side) and acoustic guitar mixed with glockenspiel, tambourine, violin, tin whistles and harmony vocals. The results are stunning particularly on the evergreen “Rosemary Hill” which features some beautiful harmonies. The electric fuzz guitar kicks in at various points on the record to startling effect, particularly evident on “Everyone’s gone to War”. If there was such a genre as garage folk then this it. The original vinyl is very much sought-after today and almost impossible to find.

Long established as a cult classic and collector’s grail, Mick Burgoyne and Leigh Dolphin’s sole album is presented here with their full co-operation. Recorded in 1971 when they were just 19 years old and fresh to the studio, “Fresh Maggots” is one of the best distillations of folk and psychedelia ever recorded. Varying in tone from heavy rock (‘Frustration’) to protest (‘Everybody’s Gone To War’), social commentary (‘Dole Song’) and pastoral (‘Rosemary Hill’), it’s a highly unusual and powerful record that enjoyed extravagant acclaim on release but sold poorly and has never been officially issued since. Original pressings are notoriously badly pressed, so this reissue is sure to be rapturously welcomed by all lovers of acid folk.