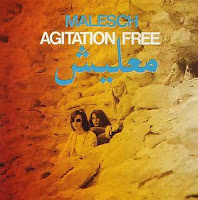 The debut album by Agitation Free followed a somewhat different path than your average Krautrock band, veering unexpectedly toward the Middle East, specifically Egypt, in search of atmosphere and material. Underneath the dueling guitars and spacy synth work, desert rhythms and taped sounds of dusky cities percolate, adding depth and spice to the otherwise smooth, Teutonic grooves. It’s a tribute to the apparent sincerity of the band that the use of these motifs does not sound at all contrived, instead integrating quite well. The delicate, intricate percussion that concludes “Ala Tul,” for instance, sounds as lively as anything by Steve Reich from around the same period. Tapes of street songs emerge surprisingly and effectively toward the end of the otherwise stately march “Khan El Khalili,” providing a bridge to the Terry Riley-ish organ trills that begin the title track. “Malesch,” like many of the tracks, spins off into a leisurely stroll, sounding unexpectedly close to some Grateful Dead jams. Even when it picks up pace, there’s an unhurried quality that fits in nicely with the Saharan undertones of the album. Malesch is a solid, even inspired recording that stands somewhat apart from the usual clichés of the genre. Fans of German progressive rock from this period will certainly want to hear and enjoy it. (Review by Brian Olewnick)