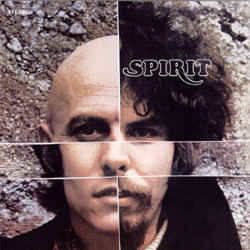 1968 debut from the US psychedelic rock band. A dark haunting classic album that contains “Fresh Garbage,” “Uncle Jack,” “Mechcanical World,” and “Elijah” all laced with superb guitar work, vocal harmonies and production. Randy California’s guitar is always in evidence, but it’s the band interplay and sense of space that makes this one of the great debut albums of the genre.

The original lineup of the group was Randy California (guitars), Jay Ferguson (vocals), Mark Andess (bass), California’s stepfather, drummer Ed Cassidy, and keyboard player John Locke. The new band was originally named the Spirits Rebellious (after a book by Khalil Gibran) but was soon shortened simply to Spirit. All but Locke had been part of the band The Red Roosters in 1965. California (then still known by his birth name of Randy Wolfe) had also played with Jimi Hendrix (then known as Jimmy James) in Jimmy James and the Blue Flames for three months in 1966.
Ed Cassidy is notable as one of the most accomplished drummers in rock and was instantly recognizable by his shaven head and proclivity to wear black. He was considerably older than the rest of the group (he was born in 1923). His earlier career was primarily in jazz and included stints with Cannonball Adderley, Gerry Mulligan, Roland Kirk and Lee Konitz prior to joining Spirit, he was a founder member of Rising Sons with Taj Mahal and Ry Cooder.
Following a period of gigging around Los Angeles, the group attained quite a reputation. Brian Berry, the brother of Jan Berry (of Jan & Dean), heard the group and made arrangements for them to record a demo. The demo eventually made its way into the hands of Lou Adler, who was in the process of forming a new record label, Ode Records, which was distributed by Epic Records.
The group’s first album, Spirit, was released in 1968. Though it didn’t spawn any hit singles (the track Mechanical World was released as a single [with a humorous label on the 45 which lists the playing time as merely being “very long”, despite the fact that it is prematurely faded in order to shorten its length a bit], but it missed the Top 100), it was a substantial underground hit, making it to #31 on the charts and staying on the charts for over 8 months.
Following the relative success of their first album, they capitalized on it with a single, I Got A Line On You. Released slightly before their second album, The Family That Plays Together (which came out in November of 1968), it became their biggest hit single. They also went on tour that year, with Led Zeppelin opening for them (who were obviously listening to the headliners, as they were known to cover Fresh Garbage in concert, used the Theremin after seeing Randy use a model that he had mounted to his guitar, and would later appropriate the Spirit instrumental Taurus for their Stairway To Heaven.